To find new ways to help individuals struggling with addiction that go beyond 12-step programs in 2020 and beyond, Warriors Heart’s CD Team Lead Vonnie Nealon, CFRC, outlines the evidence-based modalities their clinicians use to heal warriors (military, veterans and first responders) in the latest TIME Special Edition: The Science of Addiction (2019). 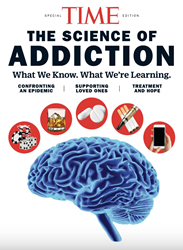 Warriors Heart Chemical Dependency (CD) Team Lead and CFRC (Certified First Responder Counselor) Vonnie Nealon, highlights their innovative addiction treatment solutions in the “Beyond The 12 Steps” story in the recent TIME Special Edition: The Science of Addiction (2019) by health journalist Lisa Lombardi. Nealon emphasizes that a “paradigm shift” in the industry is calling for new approaches in 2020, and explains how Warriors Heart is unique as the first and only private and accredited program for “warriors only” (military, veterans and first responders) in the United States.

In this eye-opening TIME magazine story, Writer Lisa Lombardi calls attention to alarming statistics including; “Every day, more than 130 people in the U.S. die from opioids, including heroin and prescription painkillers such as Oxycontin, Fentanyl, and Vicodin.” And “drinking problems affect 15 million Americans, according to a 2018 National Survey on Drug Use and Health.”

Nealon played a key role in developing Warriors Heart’s “whole body” approach to healing for our protectors where chemical dependencies, PTSD (Posttraumatic stress disorder), depression, trauma, anxiety and recurring issues are all treated in one program (unlike the Veterans Administration where these programs are separated) on a 543-acre ranch.

In addition to 12-step programs, Nealon explains that Warriors Heart uses SMARTrecovery as an alternative option to AA that emphasizes CBT. Nealon expanded that drugs and alcohol are often used as a coping mechanism, which she believes must be addressed in treatment so clients leave with “willpower.”

As another innovative approach, Nealon explains that Warriors Heart clients are assigned two counselors; “one to help treat their addiction, and the other to help them work through mental health challenges such as PTSD and depression.”

Nealon was in an AA program herself before becoming a LCDC, Licensed Chemical Dependency Counselor in 2002. In the “Beyond The 12 Steps” TIME magazine story, Nealon adds that, “she knows that AA works – just as clearly as she knows that it doesn’t work for everyone.” While it is not recommend, Nealon acknowledges that some clients return home with a plan to be on certain medications and/or use alcohol in moderation versus complete abstinence.

Clients leave Warriors Heart with new tools and life skills to rebuild lives. And as part of the aftercare program, the clinical team partners with clients to develop custom long-term recovery plans.

Looking forward into 2020 and beyond, Nealon believes new ideas will continue to evolve for substance abuse treatment programs as the recovery industry goes through this “transformation.”

About Warriors Heart (Bandera, Texas near San Antonio):
Warriors Heart provides the first and only private accredited treatment program in the U.S. for “Warriors Only” (military, veterans and first responders) faced with the self-medicating struggles of alcohol addiction, prescription and drug addiction, PTSD (post-traumatic stress disorder) and mild TBI (Traumatic Brain Injury) in a private, 40-bed facility on a 543-acre ranch outside San Antonio, Texas. While there are other treatment programs for warriors in the U.S., Warriors Heart is the only true peer-to-peer program because others are mixed with civilians. Along with a 42-day peer-to-peer residential treatment program, Warriors Heart gives warriors the option of Day Treatment, Outpatient, and Sober Living (60 Day Minimum). Warriors Heart’s work has been featured on the TODAY Show, MSNBC, FOX 11 Los Angeles, KENS5 CBS News San Antonio, Dr. Drew Midday Live with Leeann Tweeden on Talk Radio 790 KABC, Forbes, The Chicago Tribune and Addiction Pro magazine. There is a 24-hour Warriors Heart hotline (844-448-2567) answered by warriors. https://www.warriorsheart.com/

Warriors Heart residential treatment program for "warriors only" (military, veterans and first responders) is located on a 543-acre ranch just outside of San Antonio, Texas.

Warriors Heart residential treatment program for "warriors only" (military, veterans and first responders) is the "opposite of a hospital" on a 543-acre ranch just outside of San Antonio, Texas.