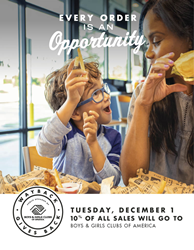 Giving Tuesday is a major fundraiser for us, and we are excited to invite our guests to join us in the giving. Ten percent of all sales will go directly to helping children at the Clubs.--Patrick Conlin, President Wayback Burgers

Wayback Burgers, America’s favorite hometown burger joint and one of the nation’s fastest-growing burger franchises, invites guests to celebrate ‘Giving Tuesday’ with them at all locations nationwide on December 1.

As a proud partner of Boys & Girls Clubs of America, Wayback Burgers franchisees are giving 10 percent of all sales on “Giving Tuesday” to the national organization. Since 2018, Wayback Burgers has raised more than $375,000 for the youth development program.

“We embrace and support the mission of Boys & Girls Clubs of America all year long,” said Patrick Conlin, President of Wayback Burgers. “But Giving Tuesday is a major fundraiser for us, and we are excited to invite our guests to join us in the giving. Ten percent of all sales will go directly to helping children at the Clubs.”

In addition, on Giving Tuesday, Wayback Burgers will announce the winner of the “Wayback Gives Back Award.” Club staff from across the country were nominated and one employee will win a $15,000 award for their Club. The winner is chosen for going above and beyond to make an impact on the lives of children.

Giving Tuesday is a global generosity movement that uses the power of people and organizations to do good in their communities and the world. Join our #GivingTuesday movement and support the Boys & Girls Clubs of America!

About Wayback Burgers
Founded in 1991 in Newark, Delaware, Wayback Burgers is a Connecticut-based fast-casual franchise with a reputation for cooked-to-order burgers and thick, hand-dipped milkshakes, served in an environment that hearkens back to a simpler place and time — when customer service meant something, and everyone felt the warmth of the community. Wayback Burgers currently operates in 31 states with over 166 locations nationally and internationally in Brunei, Sudan, Morocco, Saudi Arabia, Malaysia, Pakistan, The Netherlands, and Manitoba, Canada. Through its executed international franchise agreements, Wayback Burgers plans to open in 38 provinces/countries, including the Middle East, Northern Africa, South Africa, Bangladesh, Ireland, Germany, and, in Canada, Alberta, Ontario, Saskatchewan and British Columbia. Currently, there are LOIs for Japan.