“Set Your Sights On Great Service” was the theme of the Webster-Calhoun Cooperative Telephone Association (WCCTA) Annual Member Meeting held on March 14th in Gowrie, IA. Attendees were provided updates on the strong balance sheet of the cooperative, updates on the direction of the telco industry, election of officers and door prizes. 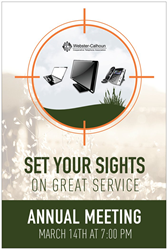 "Vantage Point works with broadband providers across the country. Webster-Calhoun's fiber buildout was organized, well-planned, efficient, and forward-looking. From start-to-finish, it was among the best FTTP projects we've seen."

Camouflage and wildlife decorated the stage and was the décor of the Webster-Calhoun Cooperative Telephone Association (WCCTA) Annual Meeting held on March 14th at the Southeast Valley High School in Gowrie, Iowa.

The color scheme and decorations illustrated the theme of the meeting: “Set Your Sights on Great Service”. "We are all overwhelmed with marketing messages that say 'WE provide the best service, the best product, the best network. Every one of our competitors say the same thing. What makes Webster-Calhoun different was the message we highlighted during the annual meeting,” states Marcie Boerner, Office Manager at WCCTA. “WCCTA provides a utility type of service that is not always tangible. In the same way the customer doesn't always see behind the scenes, work that is done by the board, staff and management. Our staff aims to please, particularly following the cooperative philosophy of providing a service in the best interest of the members that use that service locally."

General Manager Daryl Carlson provided attendees with updates on WCCTA that showed a very strong balance sheet as a result of outside investments made by the board. Daryl noted that some small telcos are beginning to struggle. That gives WCCTA the opportunity to share management, expansions, merger, or acquisition opportunities as some companies are not as financially stable as WCCTA. “You're starting to see examples of this throughout Iowa,” was stressed by Daryl. “This will not happen at WCCTA unless it is in the best interest of the members to do so."

Board President Alan Jacobson reiterated the fact that WCCTA is in a good financial position for acquiring or merging with other telcos and reviewed some of the steps taken in the last decade to achieve this. Progressive steps such as implementing Fiber to the Home over a number of years to avoid debt and outside investments in cellular markets and two other telephone companies.

The reflection of the message of the excellent condition of WCCTA was also expressed at the Iowa Communications Alliance annual meeting held in Des Moines. Here the keynote speaker, Dusty Johnson of Vantage Point Solutions, Mitchell, SD, called out several Iowa telcos that were excelling in different areas and noted WCCTA's strong network. "Vantage Point works with broadband providers across the country. Webster-Calhoun's fiber buildout was organized, well-planned, efficient, and forward-looking. From start-to-finish, it was among the best FTTP projects we've seen."

Election of officers was also held at the annual meeting. Results of the election were announced and all three incumbents remain on the board. Craig Fillman, Paton, District 1; Lynn Subbert, Churdan, District 2; Craig Larson, Vincent, District 3.