We Can Overcome Circumstances – Siblings Teach Readers Their Parents’ Lessons

Xulon authors tell the stories of their parents in order to encourage and teach a new generation. 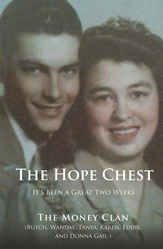 We have chosen to name our book The Hope Chest, after a large piece of furniture we referred to as ‘mother’s cedar chest.’

In their new book, The Hope Chest: It’s Been A Great Two Weeks, six siblings share about their parents’ lives, who were part of “the greatest generation” that helped our nation transition from a largely rural nation to an urban one.

They were there when electricity, running water, and indoor plumbing became commonplace. They endured a world war with all the hardships it brought. Their parents overcame hard times to live successful and rewarding lives and raise six children I the process. They taught their children that with willpower, courage, determination, and a good portion of God’s help, which He is willing to give to all, we can overcome our circumstances rather than be overcome by them.

The six siblings hope to convey some of the life lessons they learned from their parents and share with readers some of their father’s wit and their mother’s wisdom.

“We have chosen to name our book The Hope Chest, after a large piece of furniture we referred to as ‘mother’s cedar chest.’ We had no idea how she used it or what its purpose was. We found out more than sixty-eight years later, after her death. When we opened it, we found it was filled with awards, pictures, clothes, report cards, and other items that told the story of our lives together as a family,” said Wandal.

Xulon Press, a division of Salem Media Group, is the world’s largest Christian self-publisher, with more than 12,000 titles published to date. The Hope Chest: It’s Been A Great Two Weeks is available online through xulonpress.com/bookstore, amazon.com, and barnesandnoble.com.