Xulon Press presents a challenge to the status quo. 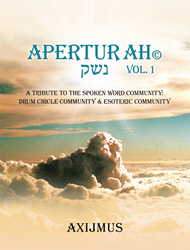 Axijmus believes that our society is pleading for change, but in order for it to come to pass, someone will have to speak up.

“I believe that it is my obligation as a citizen of this earth to share my human experiences to confront loneliness with just as much concern as fire hazards. The purpose of my book Aperturah is to distinguish the warriors from the zombies,” said Axijmus.

Xulon Press, a division of Salem Media Group, is the world’s largest Christian self-publisher, with more than 15,000 titles published to date. Aperturah is available online through xulonpress.com/bookstore, amazon.com, and barnesandnoble.com.