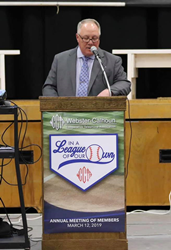 Daryl Carlson, GM says, “The investment in our Fiber network is becoming a huge economic development tool for this region. We are continually getting calls from surrounding areas to expand our service. And we are researching that. We do need to seriously consider new opportunities and investments."

General Manager, Daryl Carlson, agreed this year was a struggle making the resulting financials more of an accomplishment compared to past years based on changes in Universal Service support and swings in the market. TV rates will continue to climb which will require that WCCTA pass through increasing content charges to end users. On a positive note Daryl added that Internet download speeds have been doubled and far exceed the FCC standard. Although few details are available the FCC will be making offers for a new model support plan that could impact WCCTA for the next 10 years.

Carlson also noted, “The investment in our Fiber network is becoming a huge economic development tool for this region. We are continually getting calls from surrounding areas to expand our service. And we are researching that. We do need to seriously consider new opportunities and investments.”

The theme for this year’s annual meeting was “In A League of Our Own” as the cooperative itself was created 65 years ago when local communities were striking out with providers to offer telephone service in this high cost area. The cooperative stepped up to the plate and continues to invest in a quality network to provide even more member services such as Internet and Television and the ability to adapt to new technologies as a communications company. The investment in rural Fiber resulted in a grand slam and continues to make WCCTA different from a lot of other companies.

Board President, Alan Jacobson, also commented about options increasing the WCCTA footprint “if it is affordable and can make a return on our investment it could be good to expand.”

Jacobson referenced past decisions in building the Fiber network and how “the rock-solid financial situation speaks for itself.” Relating WCCTA to foundations of a baseball team including the stadium, the players, the coach and the fans he assured members, “Our team is #1.”

Office Manager, Marcie Boerner, echoed Carlson’s point to economic development as she introduced another video featuring local businesses and how they rely on reliable and quality broadband daily to grow and thrive. These examples are also a great way to advocate for the broadband industry at state and federal levels. She thanked these all-star members for the ability to showcase their business: 209 Main, McCrary Rost Clinic, The Gowrie News, Younique, Security Savings Bank and the Steve Peterson Farm