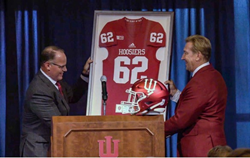 “I am also a firm believer in paying it forward and the Terry Tallen Indiana University Football Complex is an opportunity for me to give something of value back to IU.

Indiana University Vice President and Director of Intercollegiate Athletics Fred Glass, Coach Tom Allen and Terry Tallen formally dedicated the Terry Tallen Indiana Football Complex recently in an inspirational ceremony at Memorial Stadium. The dedication coincides with the Indiana University Bicentennial and the 39-year anniversary of Terry Tallen being named the United Press International’s Defensive Player of the Week in leading Indiana’s defense to a 26-0 Homecoming shut out of Wisconsin.

The stadium honors the contributions of Terry Tallen, IU football letterman and Hoosier’s co-captain in 1979 and 1980 when the 15th nationally ranked Hoosiers won the Holiday Bowl, IU’s first bowl victory. The highly respected real estate developer, investor and leader in athletics and philanthropy committed $2 million, the largest gift ever provided to IU by a former football player, to the Indiana University Bicentennial Campaign for Athletics to fund the renovation of the new state-of-the-art football team area in Memorial Stadium.

The 1979 and 1980 teams were coached by legendary coach Leo Corso. “Coach Corso was an outstanding coach, mentor and through his leadership taught us the importance of integrity, work ethic, having fun and professionalism in sports, business and life. By virtue of Coach Corso’s outstanding coaching and inspired leadership, we expected to transform the program, we expected to improve every week, we expected to be nationally ranked and expected to win a Bowl Championship.” Tallen said. Terry graduated from the Indiana University Kelley School of Business in 1982 and while earning his degree was also a three-year IU Football letterman.

“The correlation of the day-to-day challenges and rigors of being a student athlete and becoming successful in your chosen field are very similar. I owe everything to my family, my teammates, Coach Corso and the great assistant coaches, as a student-athlete and graduate of the Kelley School of Business. I learned so much at IU in so many ways. IU teaches you that there a very certain and specific way to be a professional and a way to go about business and life. The notions of professionalism and integrity are etched into the very fabric of the IU experience.”

Tallen also stated, “I am also a firm believer in paying it forward and the Terry Tallen Indiana University Football Complex is an opportunity for me to give something of value back to IU. This is not only about paying it back, it is also intended to be a driving force to further expand and enhance IU’s reach in the competitive world of college football recruiting and to motivate student athletes to achieve and pay it forward to our future generations.”

“Terry was one of the most gifted football players I coached at Indiana University, but he was also a great leader. Terry was a two-time captain for us and captain of our 1979 Holiday Bowl Championship team,” said Corso. “Following his graduation from IU, he has been a great leader in the business and real estate world. This gift reinforces Terry’s love and commitment to IU Football. I am so proud of Terry that he is still leading by example for Indiana Football 40 years later.”

Terry has been a loyal, active Indiana University alumnus, giving his time, talent and treasure back to his alma mater. In recognition of his lifetime commitment, he was awarded Indiana University’s highest honor for past letter winners, the Z.G. Clevenger Award, in 2016. This honor recognizes lifetime involvement and support for a living I-Man. In 2008, Terry established the Terry Tallen Football Leadership Scholarship given each year to a worthy student athlete who is a team captain and enrolled in the Kelley School of Business. Terry co-chaired the IU Holiday Bowl scholarship fund in 1999 raising $100,000 for this annual scholarship. Under his leadership and as a component of the funding, every player, trainer, coach and administrator received a Holiday Bowl Championship ring. Terry is also an advisory board member and frequent guest lecturer at the Kelley School of Business Center for Real Estate Studies, a member of the Policy Advisory Board at the University of San Diego’s Burnham-Moores Real Estate Studies Program and frequently speaks at real estate investment, athletic and leadership related events and charities.

“Through the great examples set by the past and current IU leadership, I am profoundly delighted to dedicate this gift to our great University with the intention that it will be inspirational and aspirational for our current and future student athletes interested in leadership regardless of sport or gender,” said Tallen.

In 2001, Terry founded Tallen Capital Partners LLC and remains the company’s Chairman and CEO. Tallen Capital Partners is a privately held, vertically integrated retail and mixed-use real estate investment and development organization with offices in San Diego, San Francisco Bay Area and Indianapolis. Terry and his partners will complete the redevelopment of the Rossmoor Shopping Center in Walnut Creek, CA in early 2020. In addition, they are currently in negotiations to entitle and develop a 200-unit luxury market and affordable rate apartment community adjacent to Tallen Capital’s Marina Landings Walmart located on the historic Monterey Peninsula. The company is currently seeking venture opportunities on the West Coast and in the Mid-Western US.

Terry has been a loyal, active Indiana University alumnus, giving his time, talent and treasure back to his alma mater.In recognition of his lifetime commitment, he was awarded Indiana University’s highest honor for past letter winners, the Z.G. Clevenger Award, in 2016.

Tallen Capital Partners is a privately held, vertically integrated retail and mixed-use real estate investment and development organization.Terry and his partners will complete the redevelopment of the Rossmoor Shopping Center in Walnut Creek, CA in early 2020.