NEA Award is One of 1,023 Made Nationally and Recognizes City of West Hollywood's ‘One City One Pride’ Annual Arts and Culture Programming 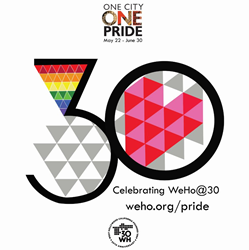 The City of West Hollywood's One City One Pride LGBTQ Arts Festival, each year, celebrates the artistic contributions of the LGBTQ community with vibrant and eclectic programming.

The City of West Hollywood will receive a grant award from the National Endowment for the Arts (NEA). The NEA announced the award on Wednesday, May 6, 2015. Through its grant-making to thousands of organizations each year, the NEA promotes opportunities for people in communities across America to experience the arts and exercise creativity.

In the second major grant announcement of fiscal year 2015, the NEA will make a $10,000 award to the City of West Hollywood to support its One City One Pride LGBTQ Arts Festival in 2016. The NEA will make 1,023 awards totaling $74.3 million nationwide in this funding round.

Each year, the City’s One City One Pride LGBTQ Arts Festival celebrates the artistic contributions of the LGBTQ community with vibrant and eclectic programming. This year, in celebration of West Hollywood’s 30th anniversary of Cityhood, One City One Pride will look at what it means to turn 30 with the theme WeHo@30, Life@30. The festival will run during 40 days from Friday, May 22, 2015 to honor Harvey Milk Day, through Tuesday, June 30, 2015, which marks the end of Pride month.

When West Hollywood was founded 30 years ago, it was the first city in the nation with a majority gay City Council. As the LGBTQ community has become less marginalized over the past three decades, One City One Pride poses the questions: “What does this progress mean for both the community and the City? What does turning 30 mean for us as individuals, as a community, and as a City?” In addition, since the City was founded during the early years of the AIDS crisis, One City One Pride also provides an opportunity to honor West Hollywood’s leadership in confronting the social, political, and cultural ramifications of the crisis with an overlapping program called “WeHo@30: Art, AIDS, WeHo,” which will examine the impact of AIDS on arts and culture with exhibitions and related programming.

This year’s One City One Pride festival will begin on Harvey Milk Day, Friday, May 22, 2015, with a screening of a work-in-progress documentary called Nelly Queen: The Life and Times of José Julio Sarria, which explores the legacy of José Julio Sarria, the first openly gay person to run for public office in the United States. Sarria was a friend and supporter of Harvey Milk and a drag performer who founded The International Court System. Some people credit Sarria with helping to pave the way for Harvey Milk’s successful run for public office.

Additional films to be screened during One City One Pride include:

There will also be two highlighted days of full programming as part of this year’s One City One Pride:

1)    On Saturday, June 6, 2015, there will be full day of art and history. This is the official opening day for the “Art, AIDS, America” exhibition preview co-hosted at the West Hollywood Library, located at 625 N. San Vicente Boulevard, and ONE National Gay & Lesbian Archives Museum and Gallery, located at 626 N. Robertson Boulevard, as well as a screening of Tongues Untied presented by The Museum of Contemporary Art, Los Angeles (MOCA) at the City of West Hollywood’s Council Chambers/Public Meeting Room at West Hollywood Library, located at 625 N. San Vicente Boulevard. Throughout the day, there will be additional art talks, film screenings, and a special LGBTQ history tour originally created by historian Stuart Timmons.

2)    On Saturday, June 27, 2015, One City One Pride’s Day of Theatre will take place at Plummer Park, located at 7377 Santa Monica Boulevard. The day will feature an eclectic array of performance art, staged readings, and an original musical production by REACH LA featuring dance elements from house and ball culture, which was brought to more prominent attention in the 1991 documentary film Paris is Burning.

For more information about the One City One Pride arts festival please visit http://www.weho.org/pride.

The National Endowment for the Arts is an independent federal agency that funds, promotes, and strengthens the creative capacity of our communities by providing all Americans with diverse opportunities for arts participation. For more information on projects included in the NEA grant announcement, go to http://www.arts.gov.

For additional information, please contact Michael Che, Economic Development and Cultural Coordinator for the City of West Hollywood, at (323) 848-6377 or at mche(at)weho(dot)org.