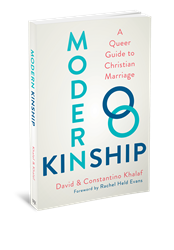 There is no doubt in our hearts that God has a plan for the well-being of LGBTQ people that is compatible with the way he created us.

Same-sex marriage may be legal in America, but it’s still far from the accepted norm, especially in Christian circles. So where can LBGTQ Christians who desire a lifelong, covenantal relationship look for dating and marriage advice when Christian relationship guides have not only ignored but actively excluded same-sex couples? As a Christian gay couple, David and Constantino Khalaf struggled to find relational role models throughout their dating, engagement, and the early months of their marriage. There was little guidance for queer couples of faith, so they began writing the blog Modern Kinship. Now in their new book, Modern Kinship: A Queer Guide to Christian Marriage, the Khalafs explore the unique challenges queer couples face on the road from singleness to marital bliss in a book that’s part personal reflection, part commentary, and full of practical advice for couples of all orientations.

“There is no doubt in our hearts that God has a plan for the well-being of LGBTQ people that is compatible with the way he created us,” the Khalafs write. “We believe God wants the marriages of LGBTQ people, like all marriages, to bear his image. We believe a marriage in God’s image is trinitarian; it brings two people together, with Christ at the center.”

Chapters tackle subjects such as meeting your partner’s parents, healing from the wounding of faith and family, planning a wedding to suit your specific vision, and deciding when and how to have children. With a foreword from NYT-bestselling author Rachel Held Evans, Modern Kinship offers not only advice, but also the stories of others in the queer community, shedding light on the potential for all kinds of queer Christian relationships. “Each of us is built for kinship,” the Khalafs write. Modern Kinship is a truly groundbreaking resource, creating a vision of biblical kinship fit for the twenty-first century.

David and Constantino Khalaf are a married couple based in Portland, Oregon, who write the blog Modern Kinship to provide a model and guide for other LGBTQ Christians pursuing lifelong partnerships. Their writing also appears at the Gottman Institute, a leader in relationship counseling and advice.

Advance Praise for Modern Kinship
“As LGBTQ Christians, we have long lacked guidance and role models when it comes to fostering a healthy marriage, but in these pages David and Constantino Khalaf take on important and often taboo topics with both wisdom and vulnerability. Modern Kinship not only validates the unions of LGBTQ couples but helps them last and thrive.”
—Amber Cantorna, national speaker and author of Unashamed: A Coming-Out Guide for LGBTQ Christians and Refocusing My Family

“In this much-needed book, David and Constantino Khalaf offer practical insight and wisdom for LGBTQ Christians seeking to find their way in the world of dating, love, sex, and marriage. They also show how the faithful witness of same-sex Christian couples can enrich and inform the practice and understanding of marriage for all Christians, regardless of sexual orientation.”
—Mattthew Vines, Executive Director of The Reformation Projection and author of God and the Gay Christian: The Biblical Case in Support of Same-Sex Relationships

“David and Tino have created an effective tool that encourages couples to have productive conversations about engagement and wedding plans, fidelity, family, and children. Their book is truly a gift.”
—Kathy Baldock, Executive Director of Canyonwalker Connections and author of Walking the Bridgeless Canyon: Repairing the Break Between the Church and the LGBTQ Community

“Dave and Tino’s stories of dating, navigating sexual ethics, working with shame, and figuring out how to do marriage as a gay Christian couple are full of hard-won wisdom. Modern Kinship is as practical as it is inspiring.”
—Matthias Roberts, host of Queerology: A Podcast of Belief and Being