What can Japan GAIN from the Native Grapes Academy? The Native Grape Odyssey Maestro course & a Walk-Around Tasting to be held in Tokyo on December 2nd- 6th

From December 2nd to December 6th, the Tokyo Aoyama branch of the Paris-founded wine school Academie du Vin will host the Native Grape Odyssey Maestro course. The course is aimed at wine professionals, endeavoring to increase their knowledge of European native grapes, as part of the Native Grapes Academy project; it will be accompanied by a Walk Around Tasting that will showcase approximately one hundred high-quality wines from Italy and Spain. 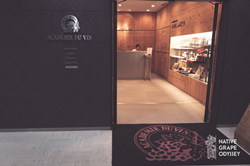 The newly-proclaimed European Quality Wine Heroes, as well as one hundred other wine lovers and professionals, will be given access to one hundred of the highest quality wines from Italy and Spain, giving them the opportunity to utilize their newfound NGA skills on producers and importers.

The Native Grapes Academy (NGA) project has now reached its final stage in the 2019 calendar year. Similar to the program previously adopted in Canada and then in Russia, the project will soon travel to Japan, “The Land of the Rising Sun”. The NGA will carry out a highly formative course on high quality European wines, titled: “Native Grape Odyssey (NGO) Maestro” as well as a Walk-Around Tasting.

Although there is no ancient wine culture in Japan, this product has gained a foothold, increasing in visibility amongst the Japanese public over the years. According to a 2019 GAIN report, “Japan Wine Market Overview”, wine consumption in Japan has grown exponentially over the last decade, a phenomenon that some have been calling a “wine renaissance”. Imports, in particular, were valued at $1.65 billion in 2018, and accounted for almost 70% of the market. In the wake of the 2019 Rubgy World Cup and the upcoming Tokyo Olympics, it is estimated that these events will attract approximately 33,000,000 tourists in 2020, and these numbers are expected to rise even further. Due to the massive influx of foreigners, likewise, there is expected to be an equally large influx of goods entering Japan. Among the countries that import to Japan, European countries play a leading role: Italy placed second behind France in 2018 (worth 185 million dollars), and Spain was awarded fifth place.

European products are therefore becoming more and more widespread within the Japanese market. However, this does not mean that consumers understand the products they are purchasing; there is still a substantial lack of information available to people and this is particularly true for the wine sector. Participants in the NGA project, who encompass the local wine market authority, have noted that there is general confusion with regard to European designations and quality marks among consumers – sometimes even among operators in the sector. In an anonymous questionnaire, one of the participants noted that: “In Japan there are many people who don't know wine very well, but they drink it, and they want to drink good wine. If they learn that wine labels are proof of a wine’s quality, they will absolutely choose labelled wines”. Japanese consumers are therefore very attentive to quality, but regardless of this, it is difficult to obtain the necessary information on the European quality system and this prevents them from discerning the real products of excellence. In a meeting with the organisers of the NGA project Prof. Paolo Calvetti, director of the Italian Cultural Institute in Tokyo and an authority on Japanese culture noted that: “The Japanese take the quality of a product under extreme consideration. Moreover, even though they are very cautious and meticulous in their decisions, when the decision is made, they show an extraordinary determination and passion”.

Taking these observations into consideration, it is clear that the NGO Maestro course will be in a position to be favourably received and take root. The educational path offered will consist of four days of face-to-face lessons, with a final exam on the fifth day. Those who pass the written portion and the tasting portion of the exam will be awarded the title of “European Quality Wine Hero”, meaning that they will then be certified to fulfil the role of communicator of European products of excellence; they will then be expected to disseminate the knowledge they absorbed throughout the course within their home country.

Irving So and Roddy Ropner will be the course instructors during the Tokyo course, each individual will bring a very special skillset to the table. Both are foreigners in Japan, having lived and worked there for more than twenty years; they both have a firm understanding of the local and foreign wine markets. The course will be taught in English, with the support of the Japanese language. In this way, Ropner and So will be able to provide students with up-to-date materials as well as have the ability to draw on the latest wine studies available in the Western world, all the while negotiating the local culture. The course will be held at the Academie du Vin Aoyama, a branch of the Parisian wine school Academie Du Vin.

Academie du Vin Aoyama will also host the NGO Walk-Around Tasting, which will be held at 14:00 on December 6th. The newly-proclaimed European Quality Wine Heroes, as well as one hundred other wine lovers and professionals, will be given access to one hundred of the highest quality wines from Italy and Spain, giving them the opportunity to utilize their newfound NGA skills on producers and importers.

Interested parties can apply to participate in the NGO Walk-Around Tasting on December 6th at the following link (japan.nativegrapeodyssey.com/apply-for-ngo-walk-around-tasting/).

About: Native Grape Odyssey (NGO) is a brand of the Native Grapes Academy (NGA) project. NGA is a project financed by the European Union and managed by Unione Italiana Vini and Interprofesional del Vino de España (OIVE) for the promotion of PDO and PGI European wines abroad, in particular in three countries: Japan, Canada and Russia. In order to achieve this, the NGA educational program will organize wine seminars, workshops and b2b meetings both in these countries and in Verona, Italy, inviting wine experts and influencers from these countries. These events realized across the span of three years (2019-21) aim to create awareness about European native grapes abroad, as well as the wines produced from them, in particular Italian and Spanish wines, which share a long tradition and a high standard of quality.