What Do The Rose, Cotton, Texas & Alamo Bowls Have In Common? Matrix Turf Systems By Hellas 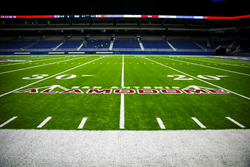 Hellas President and CEO Reed J. Seaton said, “While unfortunate the game will not be played at Rose Bowl stadium this year, I know AT&T Stadium will do the game justice. Two of the greatest programs playing in one of the greatest stadiums with the best turf in the world.

2020 has been a unique year to say the least, so why would College Bowl games be any different? In a Saturday night decision, the College Football Playoff (CFP) committee decided to move the Capital One Rose Bowl from Pasadena to AT&T Stadium in Arlington, Texas. With AT&T Stadium becoming the new host to the iconic Rose Bowl, Hellas Constructions Matrix Helix™ synthetic turf will be used for the fourth time in the CFP’s history. The inaugural Championship game was played at AT&T Stadium when Ohio State defeated Oregon 42-20 in 2015. This season, more CFP games will be played on Hellas than any other synthetic surface.

Hellas President and CEO Reed J. Seaton said, “I attended the Rose Bowl in 2006 when Texas played USC in one of the most memorable games in college football history. The Rose Bowl is a beautiful venue and while unfortunate the game will not be played at Rose Bowl stadium this year, I know AT&T Stadium will do the game justice. Two of the greatest programs playing in one of the greatest stadiums with the best turf in the world. We hope the game will be as memorable as the game I attended in Pasadena”

This year’s Rose Bowl will feature the No. 1 Alabama Crimson Tide vs the No. 4 Notre Dame Fighting Irish on January 1, 2021. The last time the Rose Bowl game was played outside Pasadena, California, was 1942. The game between Oregon State and Duke was played in Durham, North Carolina, because the West Coast was deemed unsafe after the attacks on Pearl Harbor on Dec. 7, 1941.

While the Rose Bowl movement has excited College Football fans the lineup of the New Year’s six games also includes the Goodyear Cotton Bowl Classic which the Big XII Champion No. 6 Oklahoma Sooners will play No. 7 Florida Gators at AT&T stadium on December 30th at 7:00pm CST. The Sooners recently defeated Iowa State at AT&T stadium to win the Big 12 title for the sixth straight time. The Cyclones are a client of Hellas Construction as their indoor facility is Matrix turf installed by Hellas.

Two more bowl games will be played on turf manufactured and installed by Hellas. On December 29th the Texas Longhorns play former Big XII rival Colorado Buffalos in the Valero Alamo Bowl. The Alamo Bowl is played in San Antonio Texas at the Alamodome and home to the University of Texas at San Antonio. Then on New Years Eve the TCU Horned Frogs play the Arkansas Razorbacks in the Mercari Texas bowl which is played at NRG Stadium in Houston, TX. NRG Stadium is home to the Houston Texans.

The Rose Bowl is an American outdoor athletic stadium, located in Pasadena, California, a northeast suburb of Los Angeles. Opened in October 1922, the stadium is recognized as a National Historic Landmark and a California Historic Civil Engineering landmark.

The Pasadena Tournament of Roses® is a volunteer organization that hosts America’s New Year Celebration® with the Rose Parade® and the Rose Bowl Game® and a variety of accompanying events. 935 volunteer members of the association drive the success of these annual events. For more information, visit http://www.tournamentofroses.com. Like us on Facebook and follow us on Twitter, Instagram and YouTube.