Pro-police organization InVest USA asks, "What happens after the Kyle Rittenhouse Verdict? Are we prepared for possible riots?" InVest USA CEO says probably not, and suggests police be ready with full-body armor. 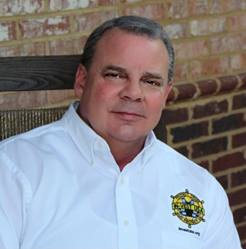 America’s legal system was founded upon the presumption of innocence, while our Constitution guarantees the right to protect oneself and one’s property. Therefore, we must remain a nation of laws as the Founders intended.

Americans are preparing for the verdict in the Kyle Rittenhouse case as hundreds of protestors have already convened and appear to be prepared to protest, and perhaps riot.

Civil lawlessness, rioting, looting, and destruction have been associated with groups advocating defunding police. Other riots occurred when some protestors believe there was racism involved by police or other authorities. Violent protests have occurred in Portland, Seattle, Minneapolis-Saint Paul, and other cities.

Law enforcement and local citizens are waiting in what might be called the calm before the storm.

InVestUSA is prepared to help keep the peace and to help protect police officers who wish to maintain law and order.

Letts' charitable organization contributes bulletproof vests to law enforcement and other first responders and has already made it known that his organization is willing to help Kenosha-area police stay safe if confronted by violent protestors.

InVest founder/CEO Michael Letts says his organization is prepared to provide police and other first responders with life-saving bulletproof vests and body armor.

InVestUSA believes that those who serve their communities should not be without the best protection and safety measures available. Letts says that anyone in need of a vest can contact InVest at info@investusa.org 803-556-2528 or visit their website.

Local law enforcement and first responders are on edge as the jury deliberates, anticipating possible organized riots in Kenosha following the verdict as hundreds of protestors are converged on the courthouse steps. Wisconsin Governor Tony Evers has 500 national guard troops on standby.

“America’s legal system was founded upon the presumption of innocence, while our Constitution guarantees the right to protect oneself and one’s property. Therefore, we must remain a nation of laws as the Founders intended,” said Michael Letts, Founder/President of InVestUSA.

Benjamin Baldung, Deputy Sheriff for 18 years in Richland County, North Carolina, expressed, “Civil unrest, rioting, looting, and violence in our communities present a challenge for everyone in law enforcement. I stand with my brothers and sisters in blue and thank InVestUSA for supporting those who protect and serve in our cities.”

InVestUSA is a national grassroots non-profit organization that provides bulletproof vests to law enforcement officers and first responders through sponsorship, fundraising with communities and local civic groups and churches, and education and training programs. Since 1993, InVestUSA has donated more than 7500 bulletproof vests in 25 states. The group maintains that bulletproof vests save lives, vowing to provide them to those who protect others.