What If You Found Out You Were Not An American?

Don Padilla, CEO of MVP Sports & Entertainment Management, has been brought on as Executive Producer of MI Vida DACA- My DACA Life, by Avenida Productions to complete the film. 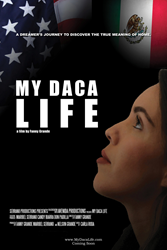 A DREAMER'S JOURNEY TO DISCOVER THE TRUE MEANING OF HOME

Don Padilla, CEO of MVP Sports & Entertainment Management, has been brought on as Executive Producer of MI Vida DACA- My DACA Life. You may remember Don Padilla as he co-wrote the book Not Another Broke Athlete, which featured many athlete interviews including Oscar De La Hoya, Aaron Boone, Jacob Cruz, Warren Moon and others, which was to make athletes aware of financial pitfalls, define their purpose and live a fulfilled life. He said, "Even if you are 'rich' financially you can still live a 'poor' unfulfilled life."

Last year, Don sold his financial service practice PS&A Wealth Management, to make a bigger difference in the entertainment and sports industry as he incorporated MVP Sports & Entertainment Management, which have talent managers for talent and sports agents for athletes. Don Padilla’s goal as the CEO of MVP Sports & Entertainment Management is to grow the company to be the best in sports and entertainment with the right team (associates of MVP), talent and athletes that share the same vision of wanting to evolve and at the same time contribute to others in making this world a better place.

Avenida Productions founded by Fanny Veliz and Nelson Grande decided to bring Don Padilla on board as an Executive Producer of MI Vida DACA- My DACA Life. Avenida is a production and consulting company committed to empowering the independent filmmaker to bring their projects to fruition with passion and integrity. There focus is on filmmakers with projects that highlight diversity of all kinds. They provide the services necessary for any project from Crowdfunding to Distribution and everything in between. Mi Vida DACA-My DACA Life will finish production in early October and be released in the election year 2020. Deferred Action for Childhood Arrivals, also known as DACA Mi VIDA DACA- My DACA Life is a true story of a girl who grew up in America and didn’t realize she wasn’t an American. “Dreamer,” Maribel Serrano found out in high school that she was not an American Citizen when her friends where applying for driver’s licenses and work permits and her parents told her that she cannot do those things.

She came to the US at the age of four and didn't find out she was undocumented until she was in high school. As someone who believed all her life that she was and American citizen, finding out she wasn't shattered her dreams, hopes and her very identity. She was an "honors" student and part of the Gifted and Talented programs at her schools, so she felt she had a bright future ahead of her. Then she realized she was not going to be able to work legally, obtain a driver's license, travel abroad or apply for college financial aid. Nevertheless, she tried her best, and although it took her 8 years, she graduated college with a degree in journalism and began sharing her story at the age of 20. After living as an undocumented immigrant for most of her life, in 2012 Maribel benefited from Deferred Action for Childhood Arrivals the act enacted by then President Barack Obama, that allowed her to get a work permit and exception from deportation.

WHAT IS DACA?
On June 15, 2012, the Secretary of Homeland Security announced that certain people who came to the United States as children and meet several guidelines may request consideration of deferred action for a period of two years, subject to renewal. They are also eligible for work authorization. Deferred action is a use of prosecutorial discretion to defer removal action against an individual for a certain period of time. Deferred action does not provide lawful status.

Now, after 25 years, she was allowed to visit Mexico. She visited the town of her birth in hopes of finding answers and reconnecting with the homeland she never knew. Through her journey she hopes to give a face to the immigration story for her and the millions who live and work in the USA.

The DACA program was rescinded in September 2017. 800,000 young immigrants who grew up in the United States as the only home they know are losing their legal status and protections. These include teachers, doctors, business owners, parents and many others who are American in every other way, except on paper. This is a story that reflects an extremely important and defining issue in the United States and want to educate others so we may progress as a country, learn to embrace our rights, use our political voice and enhance our global compassion. With the new political climate this film has become even more important, as millions live in fear of deportation from the land they only know.

You can find out more information and make a tax deductible donation at https://creativevisions.networkforgood.com/projects/44362-creative-visions-fiscal-sponsorship-my-daca-life-mi-vida-daca