What Not to Collect – An Update from Kovels

Collecting is fun, but it is not always a good investment. Kovels updates 7 collectibles once thought to be good investments that are worth much less today. 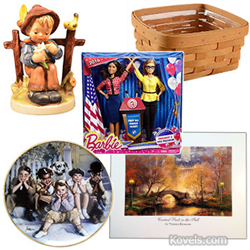 The antiques experts at Kovels have always said collecting is fun, but it is not always a good investment. They advise to buy what you like or want to use, not to make money. Whether antiques and collectibles appreciate in value or not is often a matter of luck or changing tastes. Kovels updates 7 collectibles once bought as good investments that are worth much less today.

1. Hummel figurines once sold for hundreds of dollars apiece. But the generation that collected them after World War II is downsizing and young collectors have no interest in them. A few are listed on eBay for $1. Some rare Hummels, those more than 12 inches tall or made before 1949, still sell in the hundreds, but most have little value. Same with other “collectible” figurines like Precious Moments or even Royal Doulton.

2. Limited editions sold by the Franklin Mint, Bradford Exchange and many others. “Limited edition” coins, plates, medals and other collectibles still have a very little to no resale market. Franklin Mint coins and medals can get their meltdown value but it’s a fraction of the original sale price. Same with items from the Danbury Mint. Royal Copenhagen and Bing & Grondahl Christmas plates are still wanted but are not as expensive as at the height of their popularity.

3. Longaberger baskets. Handcrafted baskets made by the Longaberger Company of Newark, Ohio, became a hot collectible in the 1990s, with some selling for more than $100. Today most sell for less than $20, even the once-expensive limited-edition baskets. Their famous basket-shaped building sold last year, and the company closed earlier this year.

5. Thomas Kinkade paintings and prints have very limited resale value. They were produced in huge quantities and buyers who paid retail prices for “paintings” at a Thomas Kinkade Signature Gallery (there were more than 300 in the 1990s) will have trouble selling them. Many paintings were not original oils by Kincade but prints with some oil paint added. Since his death in 2012, framed Kinkade prints are listed online for as little as $13. Most receive no bids.

6. Vintage lithographed metal lunch boxes were a popular collectible in the late 1980s, and by the 1990s, some were selling for thousands of dollars. Today, few lunch boxes sell for more than $100 in mint condition and most bring much less. Lunch boxes that are cross-over collectibles (Superman, Beatles or Star Trek) sell for more to those collectors.

7. Cookie jars became a hot collecting category after Andy Warhol’s cookie jar collection was auctioned for steep prices following his death in 1987. Collectors paid hundreds, even thousands for cookie jars that were limited editions and not even that old. But today, cookie jars once thought of as collectible sell for less than $50 at flea markets or online shops to actually hold cookies. Very few sell for more.