New Book Asks Provocative Question: Are All Muslims Crazy or Just Some of Them?

Author Irfan Alli is pleased to announce the release of his latest eBook ‘What’s Up With Those Crazy Muslims’ and invites readers to find out how crazy Muslims really are. 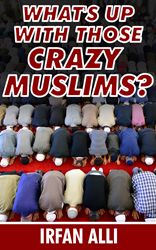 'What's Up With Those Crazy Muslims' by Irfan Alli

'What’s Up With Those Crazy Muslims]’ by Irfan Alli is a collection of answers to common questions people ask about Islam and Muslims.

It is important for everyone to know what Muslims really think and believe because they live in their neighborhoods. They are teachers at the school, they seek political office, they serve coffee at the local diner, they design and build the houses in which the residents live, and they serve as family doctors. Some of them are also refugees.

‘What’s Up With Those Crazy Muslims’ by Irfan Alli is a collection of answers to common questions people ask about Islam and Muslims. It is written so agnostics, atheists, bigots, journalists, movie makers, racists, politicians, Christians, Jews, dummies and the common person can sort through the confusion or prejudices with which they view Islam and Muslims and learn what Islam really is.

Throughout the book the two sources of Islam’s teachings, namely the Quran and the Hadith, is referenced.

‘What’s Up With Those Crazy Muslims’ is available at eBookIt.com and can also be found on Amazon, Kobo, Apple (iTunes), Barnes and Noble, Ingram Digital, Baker and Taylor, Google and many others. It is available in various delivery formats.

About the Author:
Irfan Alli is the author of several eBooks. Among them:

His volunteer efforts, professional work and recreational activities have taken him all across Canada, the U.S., Brazil, Hong Kong, Indonesia, South Korea, Japan, Guyana, Pakistan, India, Jordan, Saudi Arabia, China, Turkey, Portugal and Spain. What he has learned from his travels is reflected in his writing. Irfan lives in Toronto, Canada with his wife, four children, and a growing number of grandchildren. His website is http://www.irfanalli.com