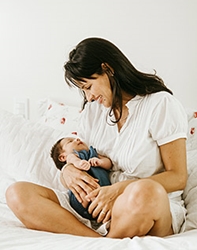 Being a busy mom focusing on her infant child can be an effective cover for an eating disorder.

“I felt better about myself when I wasn’t eating. I was taking care of my baby. I was losing weight.”

It is not uncommon for women to experience mixed emotions during pregnancy. One moment, a woman may find herself feeling extremely excited for her new bundle of joy and the next moment worrying about the changes with her body and weight gain. For some who have a preexisting eating disorder, pregnancy could exacerbate their symptoms and behaviors while some who have a history of eating disorders may find themselves fearful of a relapse. Women who do not have an eating disorder history may find themselves experiencing disordered thoughts related to food, eating, and body image during pregnancy, which can be a disconcerting development.

In addition to the emotional ups and downs of pregnancy, when a woman is faced with the challenge of discontinuing eating disorder behaviors, the battle between the disorder and the need to protect their unborn child can be intense. Many women adopt a ‘mama bear’ stance once they become pregnant: they focus on their baby’s needs for nutrition and care, and this determination helps them to abstain or reduce behaviors in order to protect their baby’s health.

Joanie S. (not her real name), who received treatment for her eating disorder in a partial hospitalization program, shared her experience. “I didn’t want my baby to have issues and I just needed to be healthy for nine months. There was an end date,” she said. By reminding herself about the importance of her baby’s needs and the fact that pregnancy is time-limited, she was able to hold on to the ‘mama bear’ mentality . Although this perspective may help some women refrain from using eating disorder behaviors, others find that being pregnant and having an eating disorder cannot be separated and “were bound to interact” [2].

After her baby is born, a woman’s body image dissatisfaction as well as negative attitudes toward food and eating can increase [3]. For individuals recovering from an eating disorder, negative body image is the greatest predictor of relapse. In fact, 80% of women who had a postpartum relapse reported significant body image distress and dissatisfaction [4]. Many women find themselves trying to lose the “baby weight,” and are in danger of triggering or exacerbating their eating disorder.

Joanie described her relationship with food and her body during pregnancy as being singularly focused on taking care of her unborn child. Becoming a “mama bear” during pregnancy staved off the eating disorder, and she didn’t experience a resurgence in behaviors until after the birth of her child. Joanie explained that it became easy to rationalize restricting her food intake during the postpartum period. “I felt better about myself when I wasn’t eating. I was taking care of my baby. I was losing weight.” Being a busy mom focusing on the needs of her infant child became an effective cover for Joanie’s eating disorder, while she was putting her own health at risk.

Although weight gain and body changes due to pregnancy are usually associated with something natural and/or positive, for women who have an eating disorder it can be difficult to grapple with how triggering their pregnant body shape can be. Many reported feeling fearful around weight checks with obstetricians during and after their pregnancy. Some women describe feeling fearful about how the information about their weight gain was shared with them by their physician [2]. While the postpartum period is an important time to attend to in their own healthcare, women with an eating disorder will often avoid physician visits out of shame and anxiety.

According to ANAD, eating disorder symptoms may decrease during pregnancy, which could lead to the false assumption that all is well [5]. While women are busy with their newborns, revealing their difficulties and seeking help for their eating disorder can become even more challenging. However, eating disorders are serious disorders, and self-care is essential. Women are encouraged to talk to their obstetrician, gynecologist, or primary care doctor about any issues that arise during and after their pregnancy. Bringing in a list of questions/concerns during a postpartum visit is recommended. A postpartum visit should include a full assessment of physical, psychological, emotional, and social well-being. Reproductive life plan, including birth control, health conditions or pregnancy complications, etc. are discussed during postpartum visits. It is also important to consult with a registered dietitian, seek individual therapy and/or support groups during this time.

If you believe you have an eating disorder, there are many online screenings. Bright Road Recovery offers a screening as well as the option to print up a letter to take to your doctor.

About the author: Joanna Bosque, LMFT is a clinical therapist for Bright Road Recovery. She is passionate about working collaboratively with her patients to explore their lives on a deeper level and gaining insight on how their experiences influence the choices they make. She believes in empowering patients, assisting them in achieving their goals, strengthening their relationships, and supporting them in developing a healthy relationship with food.

When she is not working, she spends most of her time with her two children and husband. She also enjoys finding great deals, baking, catching up on TV shows, and listening to music.