Author Explains Disabling Blushing, How To Treat It 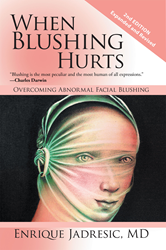 “I want to instill hope among those readers who suffer from blushing. For the non blusher, I want him/her to become more understanding and empathic.”

Facial blushing, according to author Enrique Jadresic, MD, is a universal human experience found in all cultures. Jadresic observes that people who blush do not share their feeling of embarrassment with others nor they seek help from health professionals fearing that their ailment be trivialized.

In his published book “When Blushing Hurts” (published by iUniverse), it is for the first time in the field of medicine that blushing is acknowledged as a condition that may turn disabling. It also emphasizes that help has become available for those who suffer disabling blushing.

The author himself suffered from blushing and his experiences, and that of his patients, inspired him to write the book. Thus, “Blushing sometimes may turn into a disabling condition, which has remained largely ignored by lay people and even health professionals.”

An excerpt from the book:
"I have been able to help validate the suffering of those misunderstood men and women who, with reason or otherwise, struggle to free themselves from the fire in their cheeks."

“I want to instill hope among those readers who suffer from blushing. For the non blusher, I want him/her to become more understanding and empathic.”

About the Author
Enrique Jadresic, MD, was born in Santiago. He received his medical degree from the University of Chile and then specialized in psychiatry at the University of London and the Maudsley Hospital. He was president of the Chilean Society of Neurology, Psychiatry and Neurosurgery in 2004 and 2005. He is currently an associate professor at the University of Chile’s School of Medicine and a practicing physician in Santiago. For many years his main interest in psychiatry has been its interrelation with obstetrics and gynecology. Since 2003, he has been in close contact with people suffering from blushing and has developed an expertise in the field of disabling blushing. In 2013, the author was elected International Fellow of the American Psychiatric Association in recognition of his significant contributions to psychiatry.