Where Friendsgiving is Most Popular - Top States for Hot New Holiday

“Friendsgiving” refers to a large meal during the Thanksgiving holiday season, with a focus on gathering with friends rather than family. The term first surfaced around 2008 and started to become common by 2012. BestPlaces identified the top states for Friendsgiving. 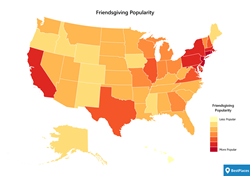 Where Friendsgiving is Most Popular

The Northeast states are “ground zero” for Friendsgiving. Seven of the ten top spots are located there. On the other hand, people who are least interested in Friendsgiving are mostly in Western states.

Friendsgiving – Who’s Doing It, and Where?

“Friendsgiving” refers to a large meal during the Thanksgiving holiday season, with a focus on gathering with friends rather than family. And it’s a recent phenomenon. The term first surfaced around 2008 and started to become common by 2012.

We know that Friendsgiving has become increasingly widespread, but who’s most likely to celebrate it and where do they live? That’s the kind of question that’s perfect for our BestPlaces data team.

First, let’s look at the number of web searches in each state, as a percent of the state’s total number of searches.

These are top ten states where people are showing the most interest in Friendsgiving this year:

At first glance, it looks like the Northeast states are “ground zero” for Friendsgiving. Seven of the ten top spots are located there. On the other hand, people who are least interested in Friendsgiving are mostly in Western states.

Now that we know where the “Friendsgivers” live, let’s look for some patterns in the state rankings. We’ll use our unparalleled collection of geo-tagged data to perform a series of correlations for find what these places have in common when in comes to Friendsgiving.

We’ll be using a simple but effective test of data connectedness, the Pearson correlation coefficient. If you’re not familiar with it, we’ve included a paragraph about it at the end of this article.

The first thing that leapt at to our BestPlaces team was a huge r value (.79) for a state’s population density, and this makes sense. If Friendsgiving is supposed to be a casual, low-stress event, you’ll want to have it with nearby friends, associates and colleagues and save that airplane flight for the family Thanksgiving. A higher density means there’s a greater likelihood of having enough friends nearby for a Friendsgiving event.

One of our preconceptions was that Friendsgiving was a mostly a Millennial thing, but we found that the cities correlated strongest with the age group of 45-54. Another significant indicator was a higher percentage of people reporting their race as “Other.”

A martial status of Single was also positively correlated, but we saw especially high scores those who were categorized as “Never Married” and “Not Divorced”.

Several other key indicators such income and voting (Republican, Democrat) tend to mirror what we normally find in states with large cities and a high population density. But a couple of other indicators did stand out.

Interestingly, Friendsgiving states were strongly associated with Catholic churchgoers (r=.65), Episcopalians, and Jews, while there was strong negative relation to Pentecostal adherents (r=-.54).

To recap, here are the metrics which closely correlate with people participating in Friendsgiving: densely populated states, age 45-54, race of “Other”, single (and in particular, never married), 4-yr college graduate, Catholic, Episcopalian and Jew.

And these metrics showed a strong negative correlation: less populated states, married, divorced, some college or a 2-yr degree, and Pentecostal churchgoers.

Check out BestPlaces.net to get these stats and much, much more for every state, county, city and zip code in the United States.

About the Pearson Coefficient of Correlation
It generates a number, called the “r value”, that is an measure of the association between two sets of numbers. The r value varies from -1 to +1, where +1 is a perfect relation and zero indicates that there is no pattern between the two data sets. Generally, a r value greater than .7 shows a very strong relationship, a value from .5 to .7 is moderately strong, and .3 to .5 is moderate. A number between 0 and .3 indicates a weak correlation.

For more info or interviews contact Bertrand Sperling at bertrand@bestplaces.net

With over 3 million monthly users, BestPlaces (http://www.bestplaces.net) is the nation's premier source for finding your best place to live. Founded by author and researcher Bert Sperling over thirty years ago, BestPlaces helps users make informed decisions about where to live, work, and retire. Bert's bestselling books "Cities Ranked and Rated" and "Best Places to Raise Your Family" are published by John Wiley & Sons and he was tagged as the "The Guy Who Picks the Best Places" by the New York Times. BestPlaces is responsible for more "Best Places" studies and research than any other single organization.