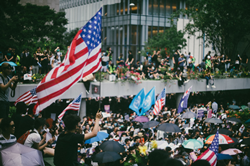 The "Which Path?" webinar will touch upon China's democracy movement, political turmoil in Hong Kong and the legacy of Liu Xiaobo, on July 29, 2020 (2-4 p.m. EDT). (Courtesy of Joseph Chan/Unsplash.)

"Liu Xiaobo’s lifelong commitment to individual freedom and to nonviolent action as an agent of change inspires still and is cause for authoritarians to fear him even in death," said panelist and author/editor Joanne Leedom-Ackerman.

Some of the world’s leading democracy and human rights experts will gather virtually to discuss prospects for China’s democracy movement on Wednesday, July 29, 2020, as the nation combats repression via Beijing’s new controls over Hong Kong and political freedoms.

Mandate Democracy®, an independent, nonpartisan, civil democracy organization, will present the July 29 session, running from 2-4 p.m. EDT, from George Mason University in Fairfax, Va. The panel – entitled “China: Democracy or Autocracy? What is the Path Ahead?” – will highlight the leadership, legacy and inspiration of Liu Xiaobo, China’s “Empty Chair” Nobel Peace Prize winner and an intellectual force, set against the nation’s current political turmoil. This month also marks three years since his death while serving an 11-year sentence in Chinese prison.

On the event, panelist and author/editor Leedom-Ackerman noted, “Liu Xiaobo’s lifelong commitment to individual freedom and to nonviolent action as an agent of change inspires still and is cause for authoritarians to fear him even in death.”

Fellow panelist Teng Biao has supported pro-democracy efforts in Hong Kong and continues to denounce legislative measures that strengthen China’s grip over the city. Because of his promotion of human rights and democratization in China, Teng Biao was kidnapped three times by Chinese secret police. He was detained and severely tortured in 2011 amid China’s pro-democracy protests and “Jasmine crackdown.” Teng Biao was eventually released by Chinese law enforcement.

Teng Biao noted, “Liu Xiaobo’s life will be an unstoppable inspiration for the fight for freedom and democracy in China. Yet his death is a huge symbol of suffering under the CCP’s brutal regime, and a symbol of the evil consequences of the West’s appeasement policy toward China.”

Richardson, co-panelist, is the author of “China, Cambodia, and the Five Principles of Peaceful Coexistence,” which includes information on China’s foreign policy since 1954’s Geneva Conference. As the China director at Human Rights Watch, she has penned numerous articles on domestic Chinese political reform, democratization and human rights.

“As abuses across China multiply, Liu’s charges to secure justice and the freedom of expression matter now more than ever,” she said.

Link, a professor of comparative literature and foreign languages and a contributor to “The Journey of Liu Xiaobo,” noted, “For a decade, Liu Xiaobo was the intellectual north star of China’s dissident movement, and he can still be that for us, today.”

Responders to the panel will include Andrew Nathan, sinologist and professor of political science at Columbia University and Cui Weiping, a retired professor of the Beijing Film Academy. Nathan is co-editor of “The Tiananmen Papers” (along with Link) and a contributor to “The Journey of Liu Xiaobo.” Weiping is a Chinese visiting scholar in the U.S. and fellow contributor to “The Journey of Liu Xiaobo.”

The July program is hosted by Virginia-based Inter-Agency Seminar Group (IASG), which brings together members from government, academia and industry to learn about current issues often related to public policy.

Protesters gather in Hong Kong. An expert panel will gather on July 29 to discuss recent events in China and the legacy of Liu Xiaobo.Image courtesy of Joseph Chan/Unsplash.

Unrest in Hong Kong has spurred global conversation about China's democracy movement. Expert panelists will discuss in a virtual session on July 29 from 2-4 p.m. EDT.Image courtesy of Han Min T/Unsplash.