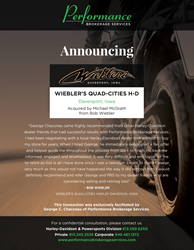 "It was very difficult and emotional for me to retire as this is all I have done since I was a teenager.”

Performance Brokerage Services, a new car and Harley-Davidson dealership broker is pleased to announce the sale of Wiebler’s Quad-Cities Harley-Davidson in Davenport, Iowa from Bob Wiebler to Michael McGrath.

Wiebler’s Quad-Cities Harley-Davidson was established in 1990 by Wayne Wiebler, Bob Wiebler and Stephen Wiebler. In 1951, Wayne started in the motorcycle business in Peoria, Illinois for the Walters family. In 1965, Bob joined the Walters Brothers dealership in the Parts Department. Wayne’s son, Stephen, joined them both in 1980. After many years at the Walters Brothers dealership, the Wiebler family acquired an existing Harley-Davidson dealership in Bettendorf, Iowa.

In 1999, Stephen and Bob relocated the dealership to Davenport and celebrated a grand opening of their new facility on January 22, 2000, forty-nine years after Wayne Wiebler started his career in the motorcycle industry. This was a lifelong dream come true for the Wiebler family. The dealership has remained in the same location ever since.

After 28 years of ownership, the Wiebler family decided it was time to retire from the business and hired George C. Chaconas to assist them with selling Wiebler’s Quad-Cities Harley-Davidson. George is the head of the National Harley-Davidson and Powersports Division for Performance Brokerage Services, the nation’s highest volume automotive and powersports dealership brokerage firm. Following the sale, Bob Wiebler commented: “I had been negotiating with a local Harley-Davidson dealer that wanted to buy my store for years. When I hired George, he immediately negotiated a fair offer and helped guide me throughout the process from start to finish. He kept me informed, engaged and levelheaded. It was very difficult and emotional for me to retire as this is all I have done since I was a teenager.”

Michael McGrath is part of the McGrath family that owns and operates numerous high-profile dealerships throughout Illinois and Iowa, including Lexus of Chicago, Honda of Chicago, Acura of Chicago, Lexus of Westmont, Ford Hyundai of Cedar Rapids, and many more. Michael’s popularity in the region also stems from his heavy involvement as the owner and operator of McGrath Harley-Davidson in Dubuque, McGrath Hawkeye Harley-Davidson in Coralville and McGrath Powersports of Cedar Rapids. The acquisition of Wiebler’s Quad-Cities Harley-Davidson was the perfect strategic fit for Michael, expanding his footprint in the immediate area.

The dealership will reopen for business on Wednesday, December 5th under McGrath’s ownership. The dealership name will change to McGrath Quad City Harley-Davidson and will remain at the current location of 5320 Corporate Park Drive in Davenport, Iowa 52807.

George C. Chaconas, the exclusive agent for this transaction and the head of the National Harley-Davidson and Powersports Division for Performance Brokerage Services commented, “It brings me great pleasure to have assisted the Wiebler family with passing the torch to the McGrath family. I wish Bob and his wife, Tracy Wiebler an enjoyable retirement and thank them for the opportunity to earn their business.”