WiFi Calling innovator Republic Wireless significantly expanded its smartphone portfolio to include the stylish Google Nexus 6P by Huawei. Republic’s new Clear Choice Plans which start as little as $15/month pass the savings gained from its “WiFi first” approach on to customers in the form of simple to understand plans that are 40%-60% less expensive than comparable plans from the big carriers. 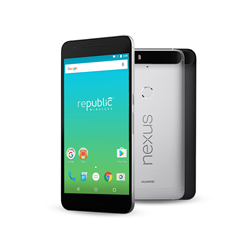 WiFi Calling innovator Republic Wireless is dialing up the pressure on the bigger carriers with a greatly expanded Android smartphone portfolio including the popular Google Nexus 6P by Huawei.

Republic’s goal is to bring the best deal in wireless directly to consumers – great phones, great service at low prices and no funny business in the fine print.

WiFi Calling innovator Republic Wireless is dialing up the pressure on the bigger carriers with a greatly expanded Android smartphone portfolio including the popular Google Nexus 6P by Huawei. Normally $499, the companies partnered together to offer new customers a limited time $100 discount on the Google Nexus 6P to celebrate its launch on the nation’s best wireless network for saving a lot of money. Additionally SIM cards will be offered for free on Thursday, August 11th to anyone activating a previously owned Google Nexus 6P by Huawei on the Republic Wireless network.

Sporting a gorgeous aeronautical-grade anodized aluminum metal shell and 3D curved glass, the Google Nexus 6P by Huawei packs a lot of style and higher-end features into a mid-tier price point. A “Pure Android” experience ensures the phone is free of carrier software or added apps.

“Republic’s goal is to bring the best deal in wireless directly to consumers – great phones, great service at low prices and no funny business in the fine print. Our product portfolio now includes leading Android smartphones for every budget range,” said Chris Chuang, chief operating officer of Republic Wireless. “We are excited to partner with one of the world’s major Android smartphone manufacturers to bring our customers the best smartphone options. The Google Nexus 6P by Huawei has proven to be a very popular smartphone in a highly competitive marketplace - it packs a lot of high-end punch for the price point.”

“Huawei is very excited to partner with industry’s leading Wi-Fi calling innovator,” said Eric Li, senior vice president of Huawei Device USA. “The discount offered by Republic Wireless is a compelling offer for savvy consumers who seek both value and a higher-end smartphone.”

Republic’s Adaptive Coverage™ blends WiFi with cellular to create expanded network coverage for consumers that is less expensive to operate. The Clear Choice Plans pass these savings on to customers in the form of being 40%-60% less expensive than comparable plans from the big carriers.

Republic Wireless has earned a loyal customer following and prestigious awards such as PC Magazine’s Editor’s Choice for “Highest User Satisfaction for plan costs in the nation” as well as top rankings in Consumer Reports and more.

About Republic Wireless
Recognized for excellence in customer service by PC Magazine and as the top pre-paid carrier choice by Consumer Reports, Republic Wireless is on a mission to provide remarkably simple and affordable ways to stay in touch with anyone, anywhere, in any way. A division of Bandwidth, headquartered in Raleigh, North Carolina, Republic Wireless leverages the power of both WiFi and cellular networks and gives consumers the ultimate flexibility to manage costs. The service uses WiFi in the home, office or anywhere else as the primary network for calls, texts and data. When outside of WiFi coverage, the smartphone works just like a typical smartphone on the cellular networks of national carriers. Visit http://www.republicwireless.com/ for more information. Media resource center here.