What’s stopping you now … bring the phone you love to the nation’s fastest growing WiFi calling carrier and get no cost service for six months. WiFi is everywhere and “WiFi first” innovator Republic Wireless is disrupting the industry yet again with a special offer of six months of no cost service for newly activated phones on its Bring Your Own Android Phone program. 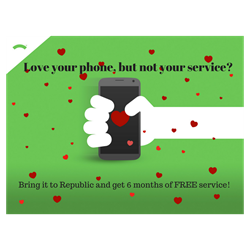 WiFi first innovator Republic Wireless is offering six months of service at no cost to anyone bringing a compatible Android phone and signing up for service.

This is about making it easy to try a WiFi first carrier with the guarantee of cellular service on the nation’s fastest growing GSM 4G-LTE network whenever you might need it.

WiFi calling leader Republic Wireless, the company that pioneered the idea of “WiFi first” resulting in tens of millions in annual savings for its customers, today announced a week long special promotion whereby anyone activating a phone on its popular Bring Your Own Android Phone program will receive six months of free service up to 2GB/cellular 4G LTE data, normally $30 a month.

“We came to show the marketplace there was a better way – to both lower prices and deliver a better customer experience. With this promotion, we are inviting consumers to see for themselves with no risk. Our philosophy is to build long-term relationships, not through complex contracts and device financing schemes, but through earning their loyalty every day with the value and experience we bring,” said Chris Chuang, CEO of Republic Wireless.

“This is about making it easy to try a WiFi first carrier with the guarantee of cellular service on the nation’s fastest growing GSM 4G-LTE network whenever you might need it. Our Bring Your Own Phone program makes it easier than ever for customers who already have fully functioning later model Android smartphones to get in on the savings. And with six months complimentary service, there isn’t much standing in your way if you are looking for an easy and sustainable way to save money on what has become a top five household expense for many consumers.”

“It’s also about accelerating our mission to provide remarkably simple and affordable ways for people to stay in touch and push the envelope on what’s possible. In a wireless world where the word “unlimited” has lost its meaning, we are intentional about doing things differently. WiFi first allows us to serve customers in ways the big carriers can’t,” Chuang adds.

Of the WiFi carriers, Republic supports the broadest lineup of Android smartphones in its Bring Your Own Phone program – currently 17+ Android smartphones (Marshmallow and above) from manufacturers including Samsung, Huawei, and Motorola. Any of these unlocked phones can be used to advantage this promotion.

Say goodbye to complicated plans and funny business in the fine print: With WiFi calling innovator Republic Wireless, Friends and Family Receive 6 months of Cell Service at no cost