Rescued by Cal Fire firefighters from the devastating Zogg and August Complex fires a few weeks ago, all three mountain lion cubs, including severely burned “Captain Cal,” have made full recoveries at Oakland Zoo’s Vet Hospital and will fly together as a family, accompanied by an Oakland Zoo’s Zoological Manager and a Columbus Zoo veterinarian in the coming weeks to their new home 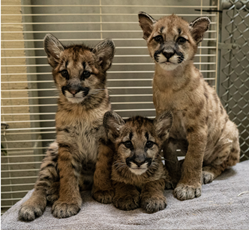 We’re grateful and beyond happy that Captain Cal has made such an amazing recovery and now has a family with the two females.

Named “Captain Cal” by the Cal Fire firefighters who found him limping down a burned-out road in Redding on September 30, 2020, the severely burned orphaned mountain lion cub is now fully recovered, 47 days after he was first rushed to Oakland Zoo’s veterinary hospital by the California Department of Fish & Wildlife (CDFW). With surgery, antibiotics, supportive fluids, pain medication, hand feedings, daily bandage changes, and round-the-clock care, he is ready to make the journey to his new home at the Columbus Zoo and Aquarium in Ohio sometime within the coming weeks. Captain Cal will be joined by two (unrelated to him) female cubs also orphaned by the California wildfires and rehabilitated by Oakland Zoo’s veterinary team.

In the coming weeks, the cubs will travel together on a flight from Oakland to Indianapolis, Indiana, accompanied by Oakland Zoo Zoological Manager, Angela Gibson, and the Columbus Zoo’s Vice President of Animal Health, Dr. Randy Junge, to help ensure that the cubs arrive safely. In Indianapolis, they will be met by additional members of the Columbus Zoo’s Animal Care team who oversee the Zoo’s North America region where the cubs will be residing. This team will also be a part of escorting the cubs during the last leg of their journey as they drive to the cubs’ new home at the Columbus Zoo and help get the cubs settled in comfortably.

Though typically solitary, recent research has shown that mountain lions are more social than scientists previously thought. After a mandatory quarantine period, and once the cubs are medically cleared, the Columbus Zoo team hopes to eventually introduce the cubs to female mountain lion, Jessie. At almost 17 years old, Jessie has surpassed the median life expectancy of 16 years for mountain lions in human care at facilities accredited by the Association of Zoos and Aquariums (AZA). While she is now nearly blind, she is still in good health overall. The Columbus Zoo’s Animal Care team notes that she has a sweet disposition toward other mountain lions—she was very close to her brother, Billy, with whom she was rescued as part of a wildlife confiscation in 2004. Billy passed away in early 2020, and the team hopes to provide Jessie with the opportunity to form a bond with the cubs in the future.

“Even with the cubs’ tragic beginning, their story is actually one of survival and hope. We are proud to work with our friends at Oakland Zoo, whose expertise has given these cubs another chance. We remain committed to the cubs’ care, and we will continue to share their important story with others as we work together to protect the future of wildlife and wild places,” said Columbus Zoo and Aquarium President/CEO Tom Stalf.

Like Captain Cal, his two new “sister” cubs were rescued by firefighters. The female cubs were orphaned by the August Complex fire, and while they did not suffer from burns like Captain Cal, the sisters were estimated to be only 3-4 weeks old when they arrived at Oakland Zoo’s Vet Hospital on October 9, 2020—10 days after Captain Cal’s arrival.

Captain Cal was 4-6 weeks of age and weighed only 3.75 pounds when he arrived at Oakland Zoo. His most serious injuries were the severe burns he sustained to the pads of his paws, which made him unable to walk. Director of Oakland Zoo’s Veterinary Hospital Dr. Alex Herman, along with her staff and an expert wound specialist from UC Davis Veterinary Medicine Teaching Hospital, performed extensive surgery to remove the pads so they could be allowed to regrow and heal. Daily bandage changes and advanced wound care procedures were successful and he is now fully healed and weighs a healthy 15 pounds. X-rays and an echocardiogram were also conducted by a Board-certified radiologist to ensure his heart and lungs were/are healthy.

A webpage about Captain Cal’s recovery journey was created on Oakland Zoo’s website in early November to keep the public updated on his progress as a result of the outpouring of interest. As Captain Cal underwent daily treatment, Oakland Zoo vet and animal care staff were eager to provide Captain Cal the companionship of the female cubs, but patience was required so that Captain Cal could recover enough so that the introductions to one other could safely happen.

That day came on October 28, when the cubs were introduced. Their bonding with one another was immediate, and the cubs have been together ever since—playing, cuddling and sleeping together.

Due to the widespread media coverage that helped raise awareness about their important story, many AZA-accredited zoos and other facilities were aware that the cubs needed to be placed and reached out to Oakland Zoo to offer a home for the three cubs. The Columbus Zoo was ultimately selected due to their excellence in animal care, welfare and previous experience in assisting rescued North American animals, including black bears, brown bears, moose and mountain lions.

Dr. Herman and her team at Oakland Zoo have conducted thorough final health exams on all three cubs in preparation for their departure. She and her vet team are ready to take in more wildfire victims as needed, as the effects of global warming make evident that fire threats are increasing yearly. As more wildlife victims are in need of care and rehabilitation, facilities with resources and expertise available to care for these animals are becoming scarce. Collaborating with CDFW and UC Davis School of Veterinary Medicine on the newly formed “Wildfire Relief Network” for burned wildlife was created in October 2020 as a response to the growing problem.

“We’re grateful and beyond happy that Captain Cal has made such an amazing recovery and now has a family with the two females. These cubs’ poignant faces have made an impact on so many, and helped raise awareness around the issue of global warming and the environment we – and these animals – live in. We’re fully committed to continue taking in burned wildlife that need our help, and hopefully, one day that need will no longer exist,” said Dr. Herman.

In their native range, mountain lion cubs stay with their mothers until they are around two years of age in order to learn the skills to survive on their own. Because these cubs were orphaned at such a young age, they would be unable to learn how to survive in the wild.

Fifteen mountain lion orphans have been brought to Oakland Zoo since 2017. Aside from wildfires, mountain lions are facing numerous threats in California—often struck by cars and illegally poached. These factors culminate in the human-wildlife conflict, putting them at odds with humans in encroaching urban areas and developments. Oakland Zoo partners with conservation organizations like the Mountain Lion Foundation and the Bay Area Puma Project to educate the public on the issue and help conserve the species in the wild.

Oakland Zoo helped found BACAT (Bay Area Cougar Action Team) in 2013, an alliance with the Bay Area Puma Project and the Mountain Lion Foundation, to help support the CDFW to save mountain lions caught in the human-wildlife conflict.

ABOUT OAKLAND ZOO AND THE CONSERVATION SOCIETY OF CALIFORNIA
Oakland Zoo, home to more than 750 native and exotic animals, is managed by the Conservation Society of California (CSC); a non-profit organization leading an informed and inspired community to take action for wildlife locally and globally. With over 25 conservation partners and projects worldwide, the CSC is committed to conservation-based education and saving species and their habitats in the wild. Oakland Zoo is dedicated to the humane treatment of animals and is accredited by the Association of Zoos and Aquariums (AZA), the national organization that sets the highest standards for animal welfare for zoos and aquariums.

ABOUT THE COLUMBUS ZOO AND AQUARIUM
Home to more than 10,000 animals representing over 600 species from around the globe, the Columbus Zoo and Aquarium leads and inspires by connecting people and wildlife. The Zoo complex is a recreational and education destination that includes the 22-acre Zoombezi Bay water park and 18-hole Safari Golf Course. The Columbus Zoo and Aquarium also manages The Wilds, a 10,000-acre conservation center and safari park located in southeastern Ohio. The Zoo is a regional attraction with global impact, annually contributing privately raised funds to support conservation projects worldwide. A 501(c)(3) nonprofit organization, the Columbus Zoo has earned Charity Navigator’s prestigious 4-star rating.

Captain Cal 'before & after", photo on left shows him upon on arrival at Oakland Zoo on 9/30, and right side was taken on 11/6