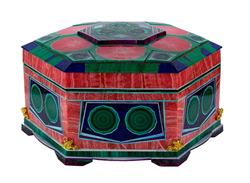 For the past 30 years, I have admired Nicolai’s brilliantly colored and meticulously crafted intarsia boxes. During his two and half year exhibition at the Smithsonian, I had envisioned that someday we could do a similar display in New York. Twenty-five years later, this vision has become reality.

Stuart and Donna Wilensky, internationally renowned fine mineral collectors and dealers, launch their first gallery exhibition. Located in Chelsea, Wilensky Fine Minerals features rare natural art within the breadth of stunning neighborhood galleries. A celebration of stones, the Wilensky gallery has dedicated its first show to intarsia, or pietre dure, the art of stone inlay. Intarsia involves the cutting and fitting together of semi-precious and decorative stones, alongside marble, and has a centuries-long history of decorating objects such as tabletops, facades, and furniture. Medvedev: Master of Intarsia, explores the work of award-winning master craftsman, Nicolai Medvedev.

Born and raised in the Republic of Turkmenistan, Medvedev was influenced by a cross-section of eastern and western art, beginning his career as a painter. After a trip to St. Petersburg in the 1970’s, Nicolai was inspired by examples of intarsia seen in great collections, and dedicated his studies to excelling in the technical skills and tools needed to create stone inlay art objects. Beginning with pendants, Medvedev juxtaposed contrasting materials, such as lapis lazuli, jasper, and malachite, graduating to a signature look of developing intricate boxes with unusual materials, such as rare malachite stalactite cross sections, dinosaur bone, precious opal, and gold-in-quartz. The “Garden Box,” featured in the show, took 2.5 years to finish, and is assembled from over 3,600 decorative stones. As much attention is paid to the inside of boxes, with elaborate intarsia designs showcased from all angles. The Master of Intarsia exhibition features works by Nicolai Medvedev, including a picture frame, sixteen intarsia boxes, and a malachite stalactite specimen.

Medvedev says, “I hope that these art objects I have created will be regarded as symbolizing nature’s beauty, made from timeless materials for generations to admire.” Regarding the partnership with Wilensky, he says, “It is important that the world sees and appreciates stone inlay through a modern lens; it isn’t just an ancient technique to be enjoyed by museum goers. It is art to be appreciated and collected in the here and now. The Wilensky gallery is a beautiful space where viewers have an appreciation for stones, minerals, and natural beauty. Throughout the winter, I hope these bright, colorful boxes bring joy and brightness to the city of New York, and to all those who enjoy art nearby.”

Stuart Wilensky was introduced to Nicolai Medvedev through a close mutual friend, Irv Brown, President, Great Rocks Inc. During a conversation at the Denver Gem & Mineral Show, the idea for a solo exhibition was proposed and enthusiastically accepted. A few weeks later, Brown flew to film an interview with Medvedev, which will be running in the gallery for the duration of the show.

A family business, Stuart and Donna Wilensky have been collecting and selling fine and rare minerals for three decades. Their sons, Troy and Connor, are also a part of the family business, and together all have conceptualized, designed and procured an exceptional collection of rotating rare gem and mineral species for the space, which opened on March 1st, 2018 to collectors and the public.

Stuart Wilensky, President of Wilensky Fine Minerals, says, “For the past thirty years, I have admired Nicolai’s brilliantly colored and meticulously crafted intarsia boxes. During his two and half year exhibition (1991-1993) at the Smithsonian, I had envisioned that someday we could do a similar display in New York. Twenty-five years later, this vision has become reality. It is with great pleasure that we were chosen by a master of his art, Nicolai Medvedev, to display a collection of his most accomplished examples of intarsia.”

Medvedev: Master of Intarsia, runs through February 28th, 2019, Monday through Saturday, from 11:00 AM-6:00 PM at the Wilensky Gallery at 173 10th Avenue, New York, NY, 10011. For questions regarding minerals or sales, contact the gallery directly at info(at)wilenskyminerals.com, call 646-822-0837, or visit http://www.wilenskyminerals.com. For press inquiries, or questions regarding this release, contact Olga Gonzalez at Pietra PR at info(at)pietrapr.com, or 212-913-9761.

About Wilensky Fine Minerals
Wilensky Fine Minerals has entered a new chapter with the opening of a gallery in the Chelsea Art District of NYC, presenting fine minerals among the world’s great art galleries, displaying minerals as works of art. The new gallery opens up the amazing world of minerals to everyone. Minerals are displayed alongside neighbors exhibiting Warhol, Basquiat, Pollock and Picasso. Achieving the impact of art through natural mineral specimens is the goal. Not a competition, but a convergence.

Nicolai Medvedev in his studio.