Recent release “The Third Scroll" from Page Publishing author William Newby explores how John Albert opens a package of antique scrolls with an introduction that personally addresses him in ancient Greek. He is further intrigued when he realizes that the rest of the text is written in the same Qumran-Hebrew language as the Dead Sea Scrolls. 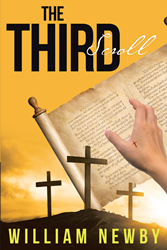 William Newby, who immigrated to the United States from Scotland in 1951, has completed his new book “The Third Scroll": a magical journey, from Long Island, New York, to ancient Greece, through the halls of academia, and behind the walls of the Roman Catholic Church in Rome, as the author tells this tale of intrigue, romance, and faith. an epic adventure in which strong, smart, sensible, and sassy women are combating chaotic evil at its worst.

Newby writes, "Wasting little time, John takes a sabbatical so that he can go to England to utilize Oxford’s reference library in translating the mysterious writings. There, he meets beautiful Emma Ferry, who will become not only his partner in deciphering the origins and meaning of the scrolls, but his romantic partner as well. Together, they will soon discover that there are other decidedly ruthless individuals who are also interested in the scrolls—more for their potential monetary value in the antiquities market than the message they might contain."

Published by Page Publishing, William Newby's riveting work details how in New York City, Sister Lily Elizabeth Alberti, the sister of John Albert, is blessed with the mystical ability to heal, and applies her gift to the critically ill from her home with a secret order of nuns housed at the Cloisters.

Lily, who has unearthed the scrolls from the darkest depths of the papal archives while researching the healing arts at the Vatican, knows that the only way to get her brother to help her translate the
documents is to shroud them in an irresistible mystery. There is one more faction with particular interest in the scrolls—members of the clandestine sect known only as the Guild, descendants of the legendary Knights Templar, whose mission is to prepare for the Second Coming. Though they are not privy to the specific content of the scrolls, they know that they contain a sacred message for mankind.

One of the people that have read this manuscript cried when the book ended. She cried because she said that she wished that what the scroll revealed could have been the truth. The third scroll contains the gift of healing and the creation of life, and John Albert and Sister Lily Elizabeth take the information from this scroll and go forward using these gifts and teaching others how to use them. The mystery ends with the pope confiscating the scrolls and reburying them in the bowels of the Vatican.

Readers who wish to experience this epic work can purchase “The Third Scroll” at bookstores everywhere, or online at the Apple iTunes Store, Amazon, Google Play, or Barnes and Noble.

About Page Publishing:
Page Publishing is a traditional, based full-service publishing house that handles all of the intricacies involved in publishing its authors’ books, including distribution in the world’s largest retail outlets and royalty generation. Page Publishing knows that authors need to be free to create – not bogged down with complicated business issues like eBook conversion, establishing wholesale accounts, insurance, shipping, taxes, and the like. Its roster of authors can leave behind these tedious, complex, and time-consuming issues, and focus on their passion: writing and creating. Learn more at http://www.pagepublishing.com.