Housing markets gained momentum in second half of 2019, with single family home sales demonstrating improvement over the same period the prior year in several markets 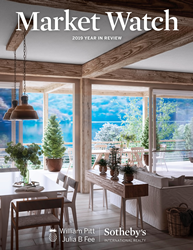 A report detailing market results for the year 2019 in Fairfield and Litchfield Counties, the Shoreline and the Farmington Valley in Connecticut, the Berkshires in Massachusetts, and Westchester County, New York, has just been released by William Pitt-Julia B. Fee Sotheby’s International Realty, the company announced today.

The report stated that the housing markets in the regions served by the company gained momentum in the second half of 2019, picking up speed from a quieter first half in most areas. Single family home sales in the third and fourth quarters demonstrated improvement over the same quarters the prior year in several markets, with even the upper end exhibiting positive signs in areas where the luxury segment has been stagnant for a prolonged period.

In the first half of 2019, Westchester and Fairfield Counties experienced a steep market decline in single family home sales year over year. But a deeper analysis revealed that the upper end, which makes up just a small percentage of sales, had an unusually significant effect. Overall in the second half of the year, sales growth in Westchester County was strong enough across price points to make up for the more sluggish first half, leaving unit sales and dollar volume about flat with the 2018 calendar year. In Fairfield County, as in Westchester, units and dollar volume increased in the fourth quarter over the same period the prior year, bringing unit sales for the year slightly ahead of the calendar year 2018. Volume remained a little behind year over year, an indication that fewer closings transacted at the upper end. Yet a deeper look at the data revealed that this phenomenon was not consistent everywhere, with Greenwich experiencing a much quieter quarter than the rest of Fairfield, skewing the county’s overall performance.

On the Connecticut Shoreline, including New Haven, Middlesex and New London counties, single family unit sales and dollar volume for the fourth quarter paced ahead of the same time last year, performing well enough to bring the region flat for the calendar year compared to 2018. In Litchfield County, a steady stream of closings in the fourth quarter made up for the quieter parts of the year to leave the region close to flat in units and volume for the calendar year versus 2018. In the Farmington Valley region of Hartford County, unit sales and volume showed small increases in the fourth quarter over the same time the year before, leaving the area close to flat for the full calendar year compared to the prior. The Berkshires finished out 2019 with unit sales and dollar volume both standing a little ahead of the full calendar year 2018.

The report commented that the downturn that extended throughout 2018 and the first half of 2019 partially resulted from the tax reform passed at the end of 2017, as well as further state and local taxes imposed by New York and Connecticut. But the market appeared to absorb those effects in the second half of 2019. Key indicators point to continued health in the economy, offsetting the negative impact of the tax bill. These include ongoing historically low interest rates; low mortgage rates; the lowest unemployment rate in decades; a booming stock market; steady GDP growth; and consistently elevated consumer confidence.

“Nationally and globally, there may be volatile political or economic factors that could affect housing, and election years can be unpredictable. Nevertheless, with the economy showing little sign of slowing we feel encouraged,” said Paul Breunich, President and Chief Executive Officer of William Pitt-Julia B. Fee Sotheby’s International Realty. “The gains of the past six months provide us with reason for cautious optimism as we kick into gear for 2020.”