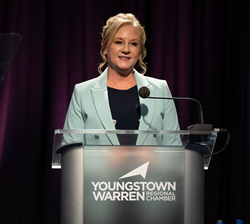 CEO & Chairman Tammy Whitworth proudly represented Window World this month as the keynote speaker for the 2021 ATHENA Awards in Warren, Ohio, an event that recognizes the professional achievements of women in the Youngstown area. As an entrepreneur who has overcome significant adversity while leading America’s largest exterior remodeling franchise, Whitworth was an excellent candidate to kick off this year’s ceremony.

Presented by the Youngstown Warren Regional Chamber and The Vindicator, the 28th Annual Athena Awards Dinner honors individuals who strive toward the highest levels of professional accomplishment: women who excel in their chosen field, have devoted time and energy to their community in a meaningful way and also open doors so that others may follow their path.

During her keynote presentation, Whitworth described the untimely death of her husband and former Window World CEO, Todd Whitworth, in 2010. His passing left her a widowed business owner and a single mother to their three young children.

As she described in her speech, Whitworth harnessed the power of community, corralling some of her husband’s most trusted advisers and friends to form a board of directors. With their guidance, Whitworth has led the company to continued success.

After directing the path forward for Window World following the loss of her husband, Whitworth was faced with a new challenge: breast cancer. Diagnosed in 2015 at age 47, Whitworth fought and won the battle. Now cancer-free, she never allowed the illness to hinder her company’s or her family’s success.

“While I hope my story encouraged anyone navigating their way through one of life’s challenging moments, it was heartening and humbling for me to be surrounded by hundreds of women who make impactful contributions to their communities each day,” Whitworth says. “Each ATHENA Award recipient is raising the bar for women around the world and setting a precedent for future generations of female leaders to follow.”

ATHENA International describes itself as a nonpartisan, nonprofit organization dedicated to developing, supporting and honoring girls and women around the globe “from the classroom to the boardroom.” More than 8,000 leaders have been honored with the ATHENA Award worldwide since the organization’s founding in the 1980s.

Mahoning County Juvenile Court Judge Theresa Dellick was named the 2021 ATHENA Award Winner at the Ohio event. Find more information about the event from coverage by The Vindicator.

About Window World
Window World®, headquartered in North Wilkesboro, N.C., is America’s largest replacement window and exterior remodeling company, with more than 200 locally owned franchises nationwide. Founded in 1995, the company sells and installs windows, siding, doors and other exterior products, with over 19 million windows sold to date. Window World is an ENERGY STAR® partner and its windows, vinyl siding and Therma-Tru doors have all earned the Good Housekeeping Seal. Through its charitable foundation, Window World Cares®, Window World and its franchisees provide funding for St. Jude Children’s Research Hospital®. Since its inception in 2008, the foundation has raised over $12 million for St. Jude. Window World also supports veterans and the military through its Window World Military Initiative (WWMI). WWMI defines Window World’s commitment to honor and serve America’s veterans, active military, and military families across the entire franchise system by focusing on three pillars: Careers, Community Outreach and Partnerships. The Veterans Airlift Command (VAC) has been a partner since 2008. During that time, Window World has contributed over $2.5 million in flights and donations to the organization. For more information, visit WindowWorld.com or call 1-800 NEXTWINDOW. For home improvement and energy efficiency tips, décor ideas and more, follow Window World on Facebook and Twitter.