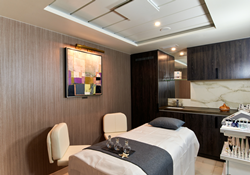 “Now with the unveiling of World Spa by Windstar, our guests will be able to take wellness to a deeper level and partake in destination-inspired treatments with locally sourced ingredients, ” says Peter Tobler, Director of Hotel Operations for Windstar Cruises.

World Spa by Windstar debuted first on Wind Surf which emerged from a major renovation in December 2019. The spa will be included on the three all-suite Star Class ships—Star Breeze, Star Legend and Star Pride—as part of the $250 Million Star Plus Initiative. The three reimagined ships will debut in May, September and December 2020. The look of these new spaces will be calm and serene, providing the perfect backdrop for a transformative experience.

“We’re delighted to expand upon Windstar’s partnership with One Spa World,” says Peter Tobler, Director of Hotel Operations for Windstar Cruises. “Now with the unveiling of World Spa by Windstar, our guests will be able to take wellness to a deeper level and partake in destination-inspired treatments with locally sourced ingredients.”

Travel on its own is a kind of therapy, but with the introduction of its innovative line of destination-themed treatments, the World Spa by Windstar will offer guests an even more profound sense of place. Natural elements are sourced from Windstar’s global destinations for use by spa therapists in a collection of Wanderlust treatments that will vary by region.

The Northern Lights Manicure and Pedicure, which is inspired by the aurora borealis itself includes a soak using seaweed sourced from the Baltic Sea, and warm LED lights modeled after the color-streaked midnight sky helps lessen signs of aging and improves the texture of the skin while also creating an unforgettable light show. A Remineralizing Glacial Mud Body Wrap from Alaska incorporates mud minerals and botanical extracts harvested directly from the remote waters of the Copper River in the Last Frontier. This wrap uses some of the purest ingredients found anywhere on the planet and will rid the skin of impurities while stimulating healthy cell regeneration. A Rosemary and Thyme Massage from the Mediterranean, which uses some of Italy’s most intoxicating ingredients—honey, rosemary and wine—conditions and calms. Additional regional treatments from Asia, Caribbean, Iceland and the South Pacific are on the menu.

In addition to therapies from some of the richest cultures on earth, World Spa by Windstar will introduce guests to a number of other wellness adventures. A range of facial therapies will fuse technology and high-level ingredients to transform skin on a cellular level. From an Aroma Stone Therapy to an Intensely Cleansing Salt Scrub, massages and body treatments employ the world’s best ingredients and techniques, while kneading out stress and restoring inner peace. The World Spa is also bringing ancient healing remedies from the Far East to the high seas, including acupuncture and traditional Chinese medicine.

Massage therapists and beauticians will be using products from Elemis, the luxurious British body and skincare line. And in keeping with Windstar’s dedication to providing the best in class in all areas, guests will now have access to a true spa and fitness center, with new and improved gym equipment from Technogym, an Italian company known for its cutting-edge designs.

In an effort to enliven both mind and body, World Spa by Windstar will also tap into fitness and nutrition to further empower guests’ journeys. Onboard fitness experts can design a custom program to help passengers achieve their wellness goals, using body composition analysis, nutritional consultation based on the prize-winning research of Dr. Barry Sears and scientifically backed personal training. Also offered are Body Sculpt Boot Camp, Pure-Form Pilates, Yoga and more.

To learn more about World Spa by Windstar and authentic small ship cruising, contact a travel advisor or Windstar Cruises by phone at 800-258-7245, or visit http://www.windstarcruises.com.

About Windstar Cruises
Windstar Cruises operates a six-ship fleet of masted sailing ships and all-suite motor ships that cruise with 350 guests or fewer throughout Europe, the Caribbean, Costa Rica and the Panama Canal, Asia, Alaska and British Columbia, Canada and New England, Tahiti and the South Pacific, Mexico and U.S. Coastal, and new for 2020-21, cruises to Australia and New Zealand, Fiji, New Caledonia, Tonga and the Cook Islands. Windstar Cruises is a part of Xanterra Travel Collection.