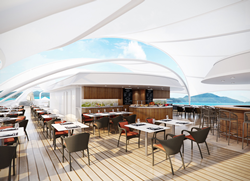 We are on course to make Windstar the undisputed culinary innovator in small ship cruising, and the inventive nature of Steven’s cuisine will be a key part of that leadership. –President John Delaney

Windstar Cruises continues to perfect its culinary program with the announcement of a new modern, casual outdoor restaurant in partnership with global grilling authority Steven Raichlen. Star Grill by Steven Raichlen, currently in development, will be a modern, casual, alfresco restaurant that serves up grilled, smoked and rotisserie specialties, including seafood, meats and vegetables cooked with global flavors and techniques, alongside craft side dishes and sauces.

Windstar’s alliance with Steven Raichlen was born from a desire to create a modern, yet casual outdoor eatery, bespoke of Windstar’s “180 degrees from ordinary” tagline, an inviting escape where guests will enjoy inventive, modern cuisine, while embracing the alfresco ambiance and casually intimate experiences of small ship dining after a busy day discovering distant ports of call.

Windstar’s culinary team and Steven Raichlen have been working in collaboration to develop the ideal al fresco dining experience, crafting food and beverage menus that will be one-of-a-kind in the cruise and restaurant industries. In 2020, Windstar cruise guests will have the opportunity to taste firsthand where Raichlen’s fascination with global grilling takes him and Windstar guests.

Steven Raichlen explains, “I’ve spent my life traveling the world’s barbecue trail to bring my readers and viewers the ultimate in global grilling. What better way to share my discoveries than on a Windstar cruise ship bound for new adventures.”

“We’re delighted to be working hand-in-hand with someone of Steven’s culinary caliber,” comments Windstar President John Delaney. “Our new partnership is a wonderful alliance that will provide our guests with an inviting new place to dine that is entirely suited to Windstar’s casually elegant style of cruising. We are on course to make Windstar the undisputed culinary innovator in small ship cruising, and the inventive nature of Steven’s cuisine will be a key part of that leadership.”

International TV host and author of 31 books, Raichlen is considered the man who reinvented modern barbecue. His most recent television series, Project Fire 2019, debuted this July on PBS, and his latest book, The Brisket Chronicles, was released to critical acclaim in May. Raichlen was inducted into the Barbecue Hall of Fame in 2015, and his books have won multiple James Beard Awards and IACP Julia Child Awards. Raichlen is the founder of Barbecue University™ and has lectured on the history of barbecue at institutions as diverse as Harvard, the Library of Congress, and the Smithsonian.

Star Grill by Steven Raichlen will first debut on Windstar’s award-winning small ship Star Breeze in February 2020 and then on her sister ships Star Legend in July 2020 and Star Pride in November 2020, all part of the line’s $250 Million Star Plus Initiative.

At Star Grill by Steven Raichlen, guests will enjoy seafood, lamb, beef and more from the grill, smoker, and slow-roasted on the rotisserie, along with innovative sauces. The top-deck, alfresco restaurant will be open for lunch and dinner service and will feature menu items such as Danish smoked shrimp, lemongrass pork skewers, and Hill Country brisket — or on sea days, enjoy a mid-morning Frühschoppen with artisanal grilled sausage and pretzel rolls.

Located just steps away from Star Bar, the ship’s popular open ocean-view top-deck bar, Star Grill by Steven Raichlen will feature deck-side dining with seating for 95, two carving stations, a selection of mouthwatering dishes with a modern twist, and refreshments enjoyed in a relaxed, alfresco bar-restaurant area with dining tables starboard and lounge seating portside; all served with a sea view.

Diners relaxing poolside during the day, or enjoying a casual evening meal after touring ashore, may enjoy select local/regional beers, along with flights to offer guests a selection to taste and compliment the cuisine. In addition to a selection of beer and wine, the restaurant will feature cocktails specially-designed for the venue with a breezy summertime vibe, like a Strawberry Pimm’s, Pineapple & Coconut Slushy, Raspberry & Melon Slushy, and Strawberry + Basil Smash; all served from the nearby Star Bar.

In addition to the new restaurant partnership, Raichlen will sail aboard one culinary-themed cruise each year with Windstar Cruises, leading grill demonstrations and lectures, as well as socializing with guests on board the small ships, catering exclusively to fewer than 350 guests.

Windstar’s newest restaurant concept and the creation of this dining space is part of Windstar’s $250 Million Star Plus Initiative, and will be available in 2020 on the line’s three, soon-to-be-reimagined Star Class ships. The extensive revitalization of these small cruise ships also features a new eclectic Spanish restaurant from acclaimed chef Anthony Sasso, an enhanced spa and fitness center, new pool and whirlpool, more deck space for lounging, the addition of 50 new suites, and additional upgrades.

The Official Cruise Line of the James Beard Foundation, Windstar delivers elevated epicurean experiences for guests to delight in the best cuisines from around the world. The boutique line has hosted more than three dozen James Beard Foundation-celebrated chefs, sommeliers, and beverage experts since 2016. Destination-inspired recipes developed for each culinary cruise are available fleet-wide for all guests to enjoy on Windstar menus every evening.

To learn more about Star Grill by Steven Raichlen, and authentic small ship cruising, contact a travel advisor or Windstar Cruises at 1-855-812-2949, or visit http://www.windstarcruises.com.