Cuadro 44 by Anthony Sasso is a trailblazing new restaurant at sea that Windstar Cruises is introducing on its three all-suite ships as part of the $250 Million Star Plus Initiative. It will debut in May 2020 on Star Breeze, followed later in 2020 on sister ships Star Legend and Star Pride. 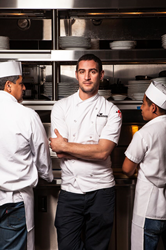 We’re trying to go off the ledge and serve people something they’ve never tried before,” says Sasso. “It’s exciting for me, for Windstar, and for the guests aboard the ship.”

Anyone who has tasted a true pan con tomate in Spain knows that this iconic Spanish dish is so much more than bread, tomato, and olive oil. Now, put it in the hands of celebrated chef Anthony Sasso — one of the youngest chefs to be recognized by the Michelin Guide — and pair it with 24-month aged jamón Ibérico sourced from pigs raised solely on acorns in Southern Spain, and you have something very special indeed.

This is the first taste that will greet guests at Cuadro 44 by Anthony Sasso, a trailblazing new restaurant at sea that Windstar Cruises is introducing on its three all-suite ships as part of the $250 Million Star Plus Initiative. Cuadro 44 by Anthony Sasso will make its debut in May 2020 on Star Breeze, followed later in 2020 on sister ships Star Legend and Star Pride.

By opening Cuadro 44, Sasso’s mission is to introduce cruisers around the globe to the flavorful and varied cooking of Spain, one of the world’s great food capitals. And no chef better embodies its cutting-edge yet rustic cuisine than Sasso, who earned his reputation as a culinary wunderkind while overseeing the kitchen at the New York restaurant Casa Mono, where he spent 13 years and earned the restaurant a Michelin star every year for 10 years.

Gourmands around the globe have been waiting in anticipation for Sasso’s next move, and with Windstar’s announcement of the inaugural menu for Cuadro 44 by Anthony Sasso, their wait will not have been in vain. “I want our guests to taste the kaleidoscope of Spain’s flavors,” says Sasso, whose menu spans the country from seaside País Vasco to North-African influenced Andalucía. “We're going to make it feel as real as possible – like you’re floating on land in Andalucía with flamenco music playing and you’re looking out at the water from the beach.” Everything will be cooked from scratch in an open kitchen, and Sasso is eager to teach guests about the vernacular of Spanish cooking while also delighting their taste buds.

Unlike many contemporary seaside Spanish fare restaurants, where guests have to select among a number of options — feeling a sense of FOMO due to what they didn’t choose — a hallmark of Cuadro 44 by Anthony Sasso will be its appetizer presentation. Every guest will be welcomed with an array of options from the menu. “A lot of the first dishes will be small bites of very typical Spanish foods,” says Sasso. “We want it to feel like you’re at a tapas bar in Spain, presented with a ton of small plates that you can share with the people next to you.”

A trademark dish on any Spanish menu is the humble yet powerful Spanish tortilla from Madrid, made with potatoes, eggs, onions and olive oil. In Sasso’s hands, this rustic appetizer is elevated to culinary greatness with the addition of parsley crème fraiche and a potato chip gremolata, which is like a seasoned bread crumb. Another Spanish staple is the mighty paella from Valencia, combining arborio rice and seafood. At Cuadro 44 by Anthony Sasso, paella will be rolled into a ball-shaped croqueta and topped with nori panko crust, saffron sofrito, and chorizo aioli.

Next up are the Platos Grandes, the entrees — and while the list is highly curated, with just six options — what’s in store for guests will prove to be revolutionary when it comes to dining at sea. Sasso wanted to get away from expected dishes and can’t wait to introduce guests to Fideos Mar y Montaña, which is a surf-and-turf from Valencia. Sasso takes the unsung angel hair pasta, chops it up, and toasts it. After sautéing the pasta in a pan, he combines a confit chicken leg, chorizo, manila clams, beans, tomatoes, and lots of saffron. “It breaks every rule, which is why I love it,” says Sasso. “It’s one of the most fun dishes to eat at a Spanish restaurant because it’s sloppy and you put a spicy garlic mayo on it. It makes no sense, but it totally works and it’s great to eat with a group of people.”

Another highlight is the cod from País Vasco. Here, bacalao (cod) is poached in olive oil and served with a “pil pil” salsa, Yukon gold potatoes, pickled red jalapeños, and enough parsley to tint it green. “One of my favorite sauces of all time is pil pil, which is a crazy Basque preparation,” says Sasso. “You take the forgotten part of the cod, the fish cheeks, and throw them into a sizzling terracotta casserole. The name is an onomatopoeia. When you add the cold cheek to the hot oil, it makes a ‘pil pil’ sound.”

Even the unassuming sangria gets reinvented here. Sasso has incorporated it into the dessert menu with a dish called Torta de Santiago from Galicia, which is a boozy almond cake with sangria-soaked fruit and whipped nata ice cream. He is also putting his own spin on Churros y Chocolate, one of the most famous desserts in Spain, using a tamarind-infused chocolate sauce that is similar to mole. “We’re going to spice this chocolate up with chile flakes, some salt, and hibiscus to give it floral notes,” says Sasso.

Ultimately, Sasso wants to thrill diners with a sense of discovery. “We’re trying to go off the ledge and serve people something they’ve never tried before,” says Sasso. “It’s exciting for me, for Windstar, and for the guests aboard the ship.”

Cuadro 44 by Anthony Sasso will debut first on Star Breeze in May of 2020; followed by Star Legend in September of 2020, and Star Pride in December 2020. To learn more about Cuadro 44 by Anthony Sasso, and authentic small ship cruising, contact a travel advisor or Windstar Cruises by phone at 1-800-258-7245, or visit http://www.windstarcruises.com.

About Windstar Cruises
Windstar Cruises operates a six-ship fleet of masted sailing ships and all-suite motor ships cruising throughout Europe, the Caribbean, Costa Rica and the Panama Canal, Asia, Alaska and British Columbia, Canada and New England, Tahiti and the South Pacific, Mexico and U.S. Coastal, and newly launched Australia and New Zealand cruises. Windstar’s fleet is the market leader in small ship cruising calling on more than 330 off-the-beaten-path and popular ports in nearly 80 countries. The boutique line caters to between 148 and 342 guests on each sailing and takes travelers on cruises that are 180 degrees from ordinary. Windstar has recently launched the $250 Million Star Plus Initiative to transform three Star Class ships with new suites, restaurants, and world-class spa and fitness center. The award-winning line is known for immersive experiences, destination authenticity, port-intensive itineraries, exceptional service, and an innovative culinary program as the Official Cruise Line of the James Beard Foundation. Windstar Cruises is a part of Xanterra Travel Collection, an award-winning, globally diversified travel company offering once in a lifetime experiences in some of the most beautiful and iconic places on earth.