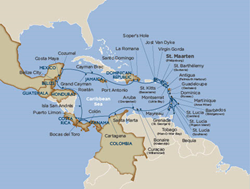 "I am beyond excited to leverage Windstar’s ships and crew to help bring the world to kids who may not necessarily have the opportunity to travel very far outside their own communities," said Windstar President John Delaney.

The crew of Windstar’s Wind Surf motorized sailing ship, which is considered to be the largest commercial sailing ship on the planet, is engaging with students on a seven-week program as the ship sails on its 56-day Grand Caribbean voyage. Wind Surf holds nearly 350 guests and has more than 200 crew members. The crew will share how they prepare for and embark on a multi-week expedition, as well as how they interact with local cultures and experience incredible sea life.

“I believe in the power of travel to enrich people’s lives and perspectives,” explains Windstar President John Delaney, who also serves on the board of the organization and pursued the partnership. “The Wind Surf will visit more than 20 countries and travel more than six thousand nautical miles on this voyage. I am beyond excited to leverage Windstar’s ships and crew to help bring the world to kids who may not necessarily have the opportunity to travel very far outside their own communities.”

“I founded Reach the World in 1997 when I embarked upon a 25,000-mile circumnavigation of the globe aboard a small sailboat and connected that journey to hundreds of students in Harlem, NY,” adds Heather Halstead, Reach the World’s Founder and Executive Director. “This opportunity to bring the voyage of the Wind Surf into so many classrooms, while also educating students about exciting careers in global hospitality, is truly a new frontier for Reach the World’s Explorer Program.”

Delaney and Windstar staff are curating specific content for the participating classrooms including web-based posts, videos, and images, as well as once-a-week live and interactive video calls. The partnership between travelers and classrooms works to expand students’ understanding of the world to prepare them to be future global citizens and decision makers. Windstar plans to partner with Reach the World on more virtual travel projects. Interested parties can follow along on the journey’s dedicated website here.

About Reach the World
Reach the World transforms the energy of travelers into a learning resource for K-12 classrooms. RTW’s programs use the web, messaging and video conferencing to connect youth with travelers in positive, personal global, virtual exchanges. A nationwide network of educators, travelers and volunteers are building a more thoughtful and welcoming society by sharing the eye-opening benefits of travel with the youth of today, who will be the decision makers of tomorrow. Over more than 20 years of operations, Reach the World has directly served more than 50,000 youth, 1,500 volunteer travelers, and 1,100 volunteers.

About Windstar Cruises
Windstar Cruises operates a six-ship fleet of masted sailing ships and all-suite motor ships cruising throughout Europe, the Caribbean, Costa Rica and the Panama Canal, Asia, Alaska and British Columbia, Canada and New England, Tahiti and the South Pacific, Mexico and U.S. Coastal, and newly launched Australia and New Zealand cruises. Windstar’s fleet is the market leader in small ship cruising calling on more than 330 off-the-beaten-path and popular ports in nearly 80 countries. The boutique line caters to between 148 and 342 guests on each sailing and takes travelers on cruises that are 180 degrees from ordinary. Windstar has recently launched the $250 Million Star Plus Initiative to transform three Star Class ships with new suites, restaurants, and a world-class spa and fitness center. The award-winning line is known for immersive experiences, destination authenticity, port-intensive itineraries, exceptional service, and an innovative culinary program as the Official Cruise Line of the James Beard Foundation. Windstar Cruises is a part of Xanterra Travel Collection, an award-winning, globally diversified travel company offering once in a lifetime experiences in some of the most beautiful and iconic places on earth. To learn more about authentic small ship cruising with Windstar, visit http://www.windstarcruises.com.