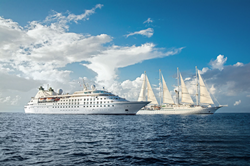 The entire Windstar Team is dedicated to delivering the world’s best small ship cruise experience. We are honored and grateful that the editors and readers of TravelAge West have recognized our leadership position in the small ship category for a second year in a row.

Windstar Cruises has been named the “Best Small Ship Line” in the 2019 TravelAge West WAVE Awards, winning this title two years in a row.

“The entire Windstar Team is dedicated to delivering the world’s best small ship cruise experience - from our culinary credentials, to our award-winning service, to our immersive and distinctive itineraries,” said Windstar President John Delaney. “We are honored and grateful that the editors and readers of TravelAge West have recognized our leadership position in the small ship category for a second year in a row.”

Windstar was also designated as a TravelAge West Editor’s Pick for “Best Onboard Dining” and “Best Cruise Line for Alaska Sailings.

The recognition of the small ship line took place at the WAVE Awards Gala on June 13 at The Ritz-Carlton, Marina del Rey, Calif., where industry leaders from across the travel landscape were in attendance along with West Coast Travel Advisors.

Now in its fourteenth year, the goal of TravelAge West’s WAVE (Western Agents’ Vote of Excellence) Awards is to give travel advisors in the West the opportunity to recognize the outstanding qualities and services of their travel-supplier partners.

The Editor’s Picks were chosen by Editor-in-Chief Kenneth Shapiro and the entire editorial team of TravelAge West. Review methods included product analysis, on-site visits, a survey of a select group of travel advisors and online research.

“After months of research, the TravelAge West editorial team, with help from our travel agent advisory board and other industry sources, compiled a comprehensive list of the top hotels, cruise lines, tour operators and destinations,” said Shapiro. “We know that Western advisors need to work with the best in the industry in order to stay competitive and, as the number-one travel trade magazine in the West, we remain committed to honoring the companies that continue to lead the way.”

Windstar has been garnering numerous awards and honors, among them, being named to:

Exploring the world by small ship allows guests aboard a Windstar cruise to go more places, see more things and connect more authentically with local people and rich cultures than possible on traditional cruise ships. The small ships of Windstar navigate smaller waterways and ports and enrich the sailing experience with award-winning programs such as Signature Expeditions in Alaska, the James Beard Foundation Culinary Cruise Collection, as well as treasured traditions such as the Signature Sail Away, Signature Onboard Barbecue, and Signature Beach Party. The Windstar team hand-curates shore excursions such as the Concierge Collection which allow guests to fully connect with local cultures on tours such as a visit to the famous Splendido Hotel in Portofino, on Italy’s Riviera for a tasting of local olive oils and a sumptuous, traditional lunch. Offering more late-night or overnight port calls, diverse itineraries, exceptional cuisine, shipboard spa and fitness amenities, and expert insight into the destinations visited, the Windstar experience offers the perfect way for cultural explorers to see the world.

Windstar’s recently announced its $250 Million Star Plus Initiative, which features extensive, upcoming renovations to the line’s three Star Class ships, and will showcase the addition of 50 new suites, two new restaurants, an enhanced spa and fitness center, an elevated pool, new retail space, and additional upgrades. The major enhancements from the quarter-of-a-million-dollar Star Plus Initiative debut throughout 2020, first on Star Breeze in February; then Star Legend in July and Star Pride in November 2020. The newly enhanced small vessels will carry fewer than 350 guests.

To learn more about authentic small ship cruising, contact a travel advisor or Windstar Cruises by phone at 1-800-258-7245, or visit http://www.windstarcruises.com.