This year, the VMP Film Festival provided aspiring filmmakers with a chance to submit their original short films for a chance to win cash prizes, an in-studio interview, custom graphic for resume and branded VMP merchandise. 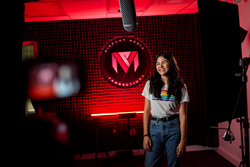 The grant from Vibrant Media Productions is going to be a huge help as we embark on production our feature film.

This year, the VMP Film Festival provided aspiring filmmakers with a chance to submit their original short films for a chance to win:

Students’ films were judged by four Vibrant Media Productions crew members, all of whom have years of videography and production experience. Each submission was rated on a scale of 1 to 5 in four separate categories: directing; editing; story; and sound design. To dismiss the possibility of alumni bias, the university from which each submission originated was hidden until the judgment process was complete.

The three winning entries were:

Third Place (UCF) - PLUGGED, written and directed by Abiesel Baez & Kahlil Collazo and starring Humberto Gal’lino. In a future not too far from our present, a dating app leads one hesitant man through a mind-altering experience.

Second Place (Full Sail University) - A Girl in Kansas, a horror short directed by Sidartha Biswa and starring Jennifer Utsey and Dennis Frebie. The film centers around a young woman aimlessly walking a lonely road on a stormy night and a good Samaritan with questionable motives.

Vibrant Media Productions would like to thank the students for making this year’s Film Fest an incredible success.