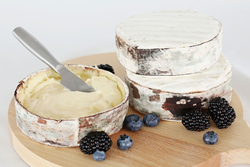 ‘Harbison’ from Cellars at Jasper Hill in Vermont was named ‘Best of Show’ among 1,954 entries at the American Cheese Society’s (ACS) 2018 Judging & Competition. The results were announced at a ceremony today at the 35th Annual ACS Conference: ‘Forged in Cheese’, at the David L. Lawrence Convention Center, Pittsburgh. Second place ‘Best of Show’ went to ‘Calderwood’, also from Cellars at Jasper Hill. Third place ‘Best of Show’ was awarded to ‘Avonlea Clothbound Cheddar’ from COWS Creamery in Prince Edward Island, Canada.

“What a thrill! These wins represent the efforts of many dedicated people from our cropping crew and herdsmen, through production and affinage, to sales and support. It took a village working in concert to pull this off,” said Mateo Kehler, cheesemaker at Cellars at Jasper Hill. “Andy and I set out to become the reference for artisan cheese in this country, and today because we have the best team, we feel like we are getting close,” he added.

“We dedicate this one to the mongers, who worked the front lines of the industry and helped us build our vision one wheel at a time,” said Zoe Brickley, director of development and marketing at Cellars at Jasper Hill, "What an amazing way to celebrate our 15th year.”

Andrea White, wholesale manager at COWS Creamery, said, “This prestigious award for Avonlea is a true honor and we’re very pleased to represent not just Prince Edward Island, but also Canada. I would like to thank ACS and the Judging Committee for their support of all cheesemakers.”

New this year, a “Boss of the Brunch” special recognition was given to ‘Herbed Rose Butter’ from Cherry Valley Dairy, Wa.

About the American Cheese Society
The American Cheese Society (ACS) is the leader in promoting and supporting American cheeses. At 1,800 members strong, ACS provides the cheese community with educational resources and networking opportunities, while encouraging the highest standards of cheesemaking focused on safety and sustainability. ACS strives to continually raise the quality and availability of artisan, farmstead, and specialty cheese in the Americas. Since its founding in 1983, ACS proudly hosts America’s foremost annual educational conference and world-renowned cheese judging and competition. For more information, visit http://www.cheesesociety.org.