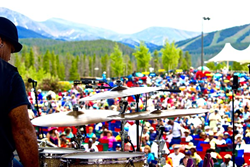 From the intimate venue in the heart of Winter Park to the well-known national and regional acts, the Jazz Festival is a really special celebration.

Today, the Winter Park & Fraser Chamber announced the dates, lineup and early bird ticket sales information for the 34th Annual Winter Park Jazz Festival. The event is part of the Odell Brewing Company Summer Concert Series, which is presented by Colorado Access. It will be held in Hideaway Park, located in downtown Winter Park, July 16-17.

The headliner for the Saturday, July 16 performance is The Isley Brothers. The group's distinguished history spanned not only two generations of Isley siblings, but also massive cultural shifts which heralded their music's transformation from gritty R&B to Motown soul to blistering funk. The Isleys have delighted music fans from the massive 1973’s hit with their rock-funk fusion cover of their own earlier single "Who's That Lady," retitled "That Lady, Pt. 1," to R&B chart-topper singles like "The Pride" (1977), "Take Me to the Next Phase, Pt. 1” (1978), "I Wanna Be with You, Pt. 1" (1979), and "Don't Say Goodnight" (1980).

The Sunday, July 17 headliner is Anthony Hamilton, who is an American R&B singer-songwriter and record producer who rose to fame with his platinum-selling second studio album “Comin' from Where I'm From” (2003), which featured the title track single "Comin' from Where I'm From" and the follow-up "Charlene." He is also known for the song "Freedom" from the soundtrack album of the movie “Django Unchained,” which was co-written and sung as a duo with indie soul singer Elayna Boynton. Hamilton was the 2008 Grammy Award winner for Best Traditional R&B Vocal Performance. Staying current, his new album, “What I’m Feelin’,” is now available for pre-order featuring the single “Amen.” He has an impressive fan base of 473,000 followers on Twitter.

Jazz Festival tickets go on sale Friday, April 1 at 10 a.m. (MST) and may be purchased by calling the Jazz Festival Box Office at (888) 409-5974 or online at http://www.altitudetickets.com/event-groups/34th-annual-winter-park-jazz-festival/.

Executive Director of the Chamber, Catherine Ross, says this year’s event is indicative of the quality music this summer festival has come to represent. “For over three decades the Winter Park Jazz Festival has been a treasured tradition for locals and visitors alike,” she says. “From the intimate venue in the heart of Winter Park to the well-known national and regional acts, the Jazz Festival is a really special celebration.”