Wisam B. Ra’ad’s newly released “The Internet of Heaven” is an electrifying story about a man’s journey of discovering a divine formula that can change the world

“The Internet of Heaven” from Christian Faith Publishing author Wisam B. Ra’ad is an engrossing novel about a man who learns about a coveted, world-changing formula while living in secret to guard his true nature. 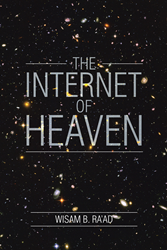 “The Internet of Heaven”: an intriguing story about a secretive man who ascertains the God Formula and uses it to seek control while keeping his true origins from others. “The Internet of Heaven” is the creation of published author Wisam B. Ra’ad, a passionate writer with a bachelor’s degree in industrial engineering from the University of Manitoba.

Ra’ad shares, “As a deep operative working alone for world peace, Sammy Hanna had been trained from a young age to be a warrior. One day, a new destiny dawned when he discovered what was referred to as the God Formula. It revealed what had been undefined and would produce extraordinary results. His objective was to obtain complete control. Sammy demonstrated his influence on Earth. A new age had come through takeovers of the internet, achieving higher levels of consciousness, recurring virgin births, and miracles.

“Sammy’s life was in constant danger throughout his existence. His identity was initially secret and his divinity unclear. His progress was crippled by an illness that caused him much pain and suffering. Through a series of highs and lows, dreams and hallucinations, he evolves in consciousness to realize a new human identity that will help shape the future. He was the most unlikely hero. He reveals himself slowly through lecturing and writing until there is no other conclusion that could be reached. Sammy had arrived and would change the path of humanity to avoid its destruction. He would neither confirm nor deny who he was, but all the evidence eventually pointed to him. His DNA was no longer double-helix-shaped but was a series of intertwined loops of infinity symbols. Everything was connected, infinitely.

“As the universe exposes its yet unseen beauty and expanse, many possibilities appear for all of us to explore. The novel is particularly relevant in a time of constant changes and advancements in technology. With international settings like Paris, Jerusalem, Toronto, and Dubai among others, the writing blends scientific facts with fictional creations.”

Published by Christian Faith Publishing, Wisam B. Ra’ad’s new book will take the readers on a worldwide expedition filled with thrilling circumstances surrounding the enigma and influence of a man with the greatest revolutionary blueprint at his disposal.

View the synopsis of “The Internet of Heaven” on YouTube.

Consumers can purchase “The Internet of Heaven” at traditional brick-and-mortar bookstores or online at Amazon.com, Apple iTunes store, or Barnes and Noble.

For additional information or inquiries about “The Internet of Heaven,” contact the Christian Faith Publishing media department at 866-554-0919.