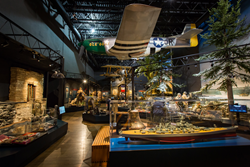 A WWII exhibit in the Wisconsin Veterans Museum

"We will share some of the lesser-known stories of Wisconsin veterans, particularly the many women, minorities and people of color who served in our armed forces," said Chris Kolakowski, director of the museum.

Just in time for Independence Day, the Wisconsin Veterans Museum will re-open July 1 with enhanced exhibits and an increased focus on diversity and inclusion, accompanied by new branding and signage throughout the galleries.

“We will share some of the lesser-known stories of Wisconsin veterans, particularly the many women, minorities and people of color who served in our armed forces,” said Chris Kolakowski, director of the museum.

Closed since March of 2020 due to COVID-19, the museum is ready to once again provide knowledge, perspective and connection to Wisconsin heroes who served our country.

Among the new offerings are exhibits on Madison natives Roberta Wells and Akira Toki. Wells was one of the first female Marines and the first person to ever see the iconic photo of the raising of the flag on Iwo Jima. Toki, the son of Japanese immigrants, volunteered for the army shortly after Pearl Harbor and went on to earn a Purple Heart and Bronze Star serving with the 100th Battalion/442nd Regimental Combat Team, the most decorated unit of its size in U.S. Army history. A Madison middle school was named for him in 1993.

More information on the museum’s reopening can be found at https://wisvetsmuseum.com/ or by visiting the Wisconsin Veterans Museum’s social media pages.

About the Wisconsin Veterans Museum

The roots of the Wisconsin Veterans Museum are linked to the desire of Wisconsin’s Civil War veterans to preserve the legacy of their accomplishments and the memory of their fallen comrades. In 1901, the Grand Army of the Republic (GAR) Memorial Hall opened in the state capitol building to fulfill the mandate of Chapter 125, which required state officials establish a memorial hall to commemorate Wisconsin’s role in the Civil War and any subsequent wars.

In 1945, control of the GAR Memorial Hall was transferred to the newly created Wisconsin Department of Veterans Affairs, where it remains an educational activity of the department. In 1991, the Wisconsin Veterans Museum opened at its current location on the capitol square to better tell the stories of Wisconsin veterans from the Civil War to present day.

The museum is located at 30 W. Mifflin St. in Madison, WI. Admission is free for everyone, always.

The hall depicting the Korean and Vietnam war struggles