With Another Industry First, OneScreen Welcomes David Eakles as Director of Education

In partnership with distributor VTI, OneScreen welcomes National Distinguished Principal award winner David Eakles into the OneScreen family as Director of Education. This position is the first of its kind for a manufacturer in the collaboration technology industry. 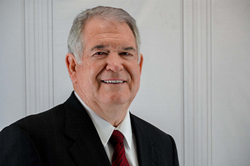 "For many years, we’ve turned to David for his impressive compendium of knowledge on various academic topics... We are honored that he has now come aboard full time." OneScreen CEO Sufian Munir.

This April, former superintendent of schools David Eakles will join OneScreen as the first and only Director of Education for a manufacturer in the collaboration tech industry. The value that Eakles brings as Director of Education is made possible due to his long-standing relationship with OneScreen distributor VTI. With more than 31 years of experience in the field of education, Eakles has proven himself to be an extraordinarily effective teacher, principal and superintendent.

Eakles has been inducted into the Kentucky Academic Hall of Fame for his service to schools across the state and, most recently, served as the leading Business Development Manager in Education for OneScreen Reseller SWC, in Louisville, KY.

In his new role, created by OneScreen specifically to take advantage of his outstanding expertise, Eakles will help guide the development of targeted educational technology, as well as consult on smart school initiatives and take the lead in crucial communications with education leaders.

“For many years, we’ve turned to David for his impressive compendium of knowledge on various academic topics, as well as his natural ability to simplify complex issues,” said OneScreen CEO Sufian Munir. “We are honored that he has now come aboard full time, just as the world of education goes through one of the most dramatic turnabouts in history. Accessing new technology in the classroom was a wishlist item for many districts just two years ago. Now it’s an absolute necessity. We’re glad to have David at our side as schools everywhere adapt to the enormity of that change.”

For Eakles, the prospect of working with new people and new challenges on the international stage was too good to pass up. He responded, “Once I saw OneScreen flat panels in action, and the excitement on the faces of teachers and their students when they got their hands on it, I knew this was something really special. At the time, I thought if there is anything better than running a school, or a district full of schools, it would be building the kind of devices that genuinely spark a love of learning. Right here, right now, working with OneScreen, that dream of mine is coming true.”

David Eakles press release as a PDFDetails on David Eakles appointment as the world's first Director of Education for a manufacturer in the collaboration tech industry.