With the Launch of Cubo Ai Plus, First-time Parents Can Turn to A.I. Tech for Proactive Safety Alerts and Important Information on Baby’s Sleep Health For Peace of Mind 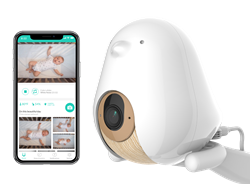 Co-founded with babies’ health in mind, parents can now prepare their baby to sleep soundly with soothing lullabies, and they can sleep peacefully throughout the night knowing Cubo Ai is watching over their little one.

Ranked as a Top Three Best Seller on Amazon during the Mother’s Day Sale in 2020, the Cubo Ai Baby Monitor continues to grow in popularity amongst parents around the world. Cubo Ai is launching a new generation of their monitor, offering A.I. detection to better Baby’s Sleep, Safety, and Memories on August 4, 2020.

It’s safe to say that the company has been moving at lightning speed but not without their due diligence. Since their founding, Cubo Ai has performed surveys, 20,000-plus questionnaires, and 233 in-depth interviews to find out what users really want. As a result, Cubo Ai was able to pinpoint parents’ strong demand for sleep analytics. For instance, to develop and release Sleep Analytics in June, Cubo Ai performed another round of interviews, where 44% of the interviewees stated that understanding their baby’s sleep would make a big impact on their ability to take care of their baby.

“As parents, we deserve peace of mind, knowing our babies are safe whether they're sleeping, napping, or playing,” said Joanna, Cubo Ai Co-Founder and CMO. “Co-founded with babies’ health in mind, parents can now prepare their baby to sleep soundly with soothing lullabies, and they can sleep peacefully throughout the night knowing Cubo Ai is watching over their little one. We continue to keep our parent customers in mind as we stay at the forefront of new innovations.”

Cubo Ai made its debut into the smart baby monitor market in 2019 using A.I. detection technology to detect face-covered events, rollover events, and precious first times. Cubo Ai has been tested and loved by over 40,000 parents all over the world, detecting risky situations such as Cubo Ai mom, Kristin, who shared her story:

“Our little bird saved us! The exact thing Cubo said it was watching out for happened to me! I looked at my alert in the middle of the night and my baby had wriggled free of a light-colored swaddle enough to pull it up over her head and completely disappear! I’ve got a sick feeling in my gut just thinking about how tightly [the] baby was wrapped.”

Cubo Ai also makes bedtime less of a shot in the dark for parents like Maggie:

“Though my baby has been sleeping through the night for a while, I've always worried about how well he slept, or how often he woke up (if he didn't cry out) and [...] how long before going back to sleep. He's so wiggly now, and he's started rolling over to sleep on his tummy, so I want to have sleep data that can help me help him get more restful sleep. This report allows me to see when he was moving around during the night, how often he woke up, when he went to sleep, and when he woke up for the day (earlier than I had thought!) - and it's so easy to see all this information (and more) compiled neatly and ready for you!”

Other features include built-in lullabies (a feature releasing August 2020), enabling parents to play classical music, white noise, or nature sounds for a baby’s dream soundtrack via the Cubo Ai App. The baby monitor also has a Full HD night vision Sony Starlight Camera, 18-hour video playback with the option to record and take photos, and event tags from baby’s sleep. Additionally, Cubo Ai Plus will be able to integrate with Smart Home devices such as Google Home and Amazon Alexa (a feature coming Fall 2020).

ABOUT CUBO Ai
Cubo Ai was created with proprietary technology to proactively warn parents of dangerous situations such as covered face events so that parents can step in when their babies need them most. Every Cubo Ai feature is designed to enhance baby safety and store lasting memories. Cubo Ai’s mission is to help every parent in the world find peace of mind and joy in their parenting journey. For more information about Cubo Ai, visit http://www.getcubo.com.