In the largest study ever completed on the sport of ultra running, RunRepeat.com with the help of the International Association of Ultrarunners (IAU) has analyzed 5,010,730 results from 15,451 ultra running events over the last 23 years. 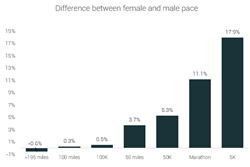 The longer the distance the shorter the gender pace gap. In 5Ks men run 17.9% faster than women, but above 195 miles, women are actually 0.6% faster than men.

In the largest study ever completed on the sport of ultra running, RunRepeat.com with the help of the International Association of Ultrarunners (IAU) has analyzed 5,010,730 results from 15,451 ultra running events over the last 23 years.

They’ve discovered among many things, that as distances extend, women quickly close the pace gap between genders and at extreme distances women in fact are faster than their male counterparts.

The findings detailed in The State of Ultra Running 2020, give a unique view into a sport that’s been seeing constant growth for the past 20 years.

Unlike the decline in participation seen in shorter distance races (under 26.2), ultra marathons continue to see increased participation year after year, suggesting that as we crest into a new decade runners are seeking out more ambitious endeavors.

Below are some of the key findings of the study:

There are numerous other findings detailed in this extensive look at ultra running, but as thrill seekers continue to push the boundaries of what’s possible, this sport is poised to capture the hearts, minds, and dollars of millions.

You can view the full study and it’s findings at: https://runrepeat.com/state-of-ultra-running.

For questions about this study, repurposing or covering its content, or RunRepeat as a whole, please reach out to Paul Ronto at paul@runrepeat.com.

About RunRepeat
RunRepeat helps to ensure that athletes of all sports have the right footwear at the absolute best price. Through aggregating user reviews, conducting extensive expert testing, scoring every model using a sophisticated CoreScore system, and scouring the internet for the best prices available, RunRepeat ensures the shoe buying process is quick and simple.