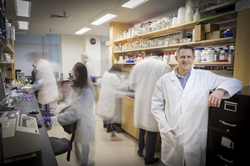 “We think the cells themselves are actively playing a role in calcification. If we can figure out how, we can start thinking about treatments that could stop them from what they’re doing.”- Kristen Billiar, Department Head and Professor of Biomedical Engineering

Worcester Polytechnic Institute (WPI) researcher Kristen Billiar has been awarded a $154,000 grant from the American Heart Association to determine how cell death leads to calcium deposits in heart tissue that cause aortic valves to fail.

The two-year project will involve laboratory experiments with cells grown in flat and three-dimensional shapes, and it will aim to discover ways to interrupt the process that leads to calcification and heart valve disease. The incidence and severity of aortic valve calcifications increase with age, and there is no way to cure the disease. Instead, a patient typically undergoes surgery to repair or replace the valve.

“We don’t know why calcific nodules form, but one of the things correlated with it is programmed cell death,” said Billiar, who is professor and head of the department of biomedical engineering. “We can use engineering techniques in reproducible experiments and see calcium depositing in cells like it does in valves. Now we want to know, what are the mechanisms involved in that?”

Programmed cell death, also known as apoptosis, is a normal process in which a cell self-destructs and breaks apart in the body in a controlled way that avoids an immune response. Some researchers hypothesize that the remnants of apoptotic cells serve as aggregation sites for calcium in the cusps of aortic valves, leading to nodules that interfere with the normal opening and closing of the valve in a pumping heart. The aortic valve is the final valve in the heart, opening so that blood can leave the heart and begin its journey through the body.

“We think the cells themselves are actively playing a role in calcification,” Billiar said. “If we can figure out how, we can start thinking about treatments that could stop them from what they’re doing.”

WPI graduate student Mahvash Jebeli will work on the project with Billiar, who expects the program to ultimately provide research opportunities for more than a dozen undergraduates under WPI’s project-based curriculum.

About Worcester Polytechnic Institute
WPI, the global leader in project-based learning, is a distinctive, top-tier technological university founded in 1865 on the principle that students learn most effectively by applying the theory learned in the classroom to the practice of solving real-world problems. Recognized by the National Academy of Engineering with the 2016 Bernard M. Gordon Prize for Innovation in Engineering and Technology Education, WPI’s pioneering project-based curriculum engages undergraduates in solving important scientific, technological, and societal problems throughout their education and at more than 50 project centers around the world. WPI offers more than 50 bachelor’s, master’s, and doctoral degree programs across 14 academic departments in science, engineering, technology, business, the social sciences, and the humanities and arts. Its faculty and students pursue groundbreaking research to meet ongoing challenges in health and biotechnology; robotics and the internet of things; advanced materials and manufacturing; cyber, data, and security systems; learning science; and more. http://www.wpi.edu