The David Bacon Archive is now one of the largest collections of documentary photography at Stanford Libraries, offering scholars and students stunning perspectives of labor and social justice movements as well as societal impacts of globalization and war. 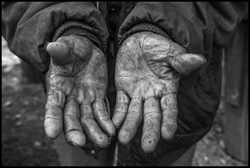 “Simply put, this body of work is a visual documentation of the fight for social justice in working-class communities..."

From the streets of Oakland and Los Angeles to farmlands and factories across the United States, Mexico, the Philippines and Iraq, the images of photojournalist David Bacon reveal powerful, and often personal, portraits of resilience and courage from communities habitually overlooked or pushed to the margins of society. These stories are now featured in a new exhibition, Work & Social Justice: The David Bacon Archive at Stanford, on display through May 9, 2021 in the Cecil H. Green Library at Stanford. Access to campus libraries is currently limited to Stanford ID cardholders due to COVID-19; however, the online exhibition, which includes additional content not included in the physical show, is accessible to everyone, and is part of an accessible digital spotlight collection that includes significant images from his body of work.

“The faculty support we received for this acquisition cut across several disciplines,” said Roberto Trujillo, associate university librarian and head of Special Collections. “Due to the interest in the collection, we immediately began working to make it accessible, but had no idea how important our initial efforts of processing and digitizing David’s work would be until COVID-19 hit and the university pivoted to online learning.”

The realization that the physical exhibit would need to be postponed quickly set in among the curatorial team. With images processed and digitized, and everyone sheltering-in-place, the Special Collections team decided to launch a virtual version of the show using Stanford Libraries’ online exhibition platform Spotlight, which currently hosts over one hundred exhibitions from the university libraries’ collections.

A LIFE DEDICATED TO ACTIVISM

Bacon is an award-winning California-based photographer, writer, social activist, and union organizer whose life has been committed to social justice. His father, a printer and head of the Book and Magazine Guild union, was blacklisted during the McCarthy era. Bacon watched both of his parents rally communities behind common causes, then spent two decades as a factory worker and union organizer. In the mid-1980s he began working as an independent photographer and journalist documenting the lives and social movements of migrants, farm workers, and communities impacted by globalization.

"David’s photographs capture critically important aspects of movements for civil rights and social justice,” said Ben Stone, associate director of Special Collection and curator of American and British History. “His background, coupled with his ability to make those around him feel at ease, is evident in his photography. David provides us a bridge to get close and better understand the lives of those he photographs in ways we might not otherwise experience.”

Bacon’s photography has been exhibited widely in the United States, Mexico, and Europe. He has published several books and is a frequent radio guest on KPFA-FM, KIQI and other media, speaking about labor, immigration, and the global economy.

Images for the exhibition were selected and grouped into six themes: Farm Workers, Immigrant Workers, Mexico, Migration and the Border, Poverty and Protest, and From Davao to Baghdad.

“I want people who are looking at these photographs to understand what it feels like to do this work,” notes Bacon in the exhibit’s introduction. “Many of these jobs are physically very demanding and so I want to show that; the physical requirement is of working…"

Bacon works as a participant in the social movements and communities he documents, which enables him to provide a unique first-hand account of the human stories comprising larger social movements. Thus, according to Stone, his work “allows for those stories to then be shared and studied.”

“We had a saying when I was a union organizer--and I think it's still true and a lot of people say it--and that is, ‘we're only one paycheck away from living on the streets’ which I think is true for an enormous number of people,” said Bacon. “The purpose of documenting this is also to show what people do about it. The social struggles and social movements they organize not just to affect their own personal situation, but to change the world for social justice.”

Stanford Libraries will host a virtual conversation between Bacon and Los Angeles City Council member and former California Senate Leader Kevin de León on October 29 to commemorate the opening of the exhibition. Bacon and de León will discuss the economic transformation of California in the early 1990s and the impact it had on the economy, labor, and politics of the state and how Bacon’s photography captures some of these defining moments in California history.

When asked about the importance of the photography archive of David Bacon at Stanford, De León said, “Simply put, this body of work is a visual documentation of the fight for social justice in working-class communities. It is "our" history. David’s voice comes through in these images, offering a testament to the human dignity and love that goes into providing for one's family, no matter the sacrifice.”

An accompanying 95-page catalog has been published to commemorate the exhibition opening. The catalog is available for download, and physical copies of the exhibition catalog can be purchased for $25 through the Stanford Libraries Department of Special Collections.

“This exhibition and catalog are both important presentations of David Bacon's work and the archive of thousands of images are now preserved for a continued critical reception for generations to come," said De León.

Before planning to visit the exhibition in Green Library’s Peterson Gallery and Munger Rotunda, please consult Stanford Libraries’ entry requirements and Green Library’s hours as there are university restrictions for public access to campus and reduced library hours due to COVID-19.

A hotel worker gets arrested during the strike against the Marriot Hotels in San Francisco. 2018. The David Bacon Archive, Department of Special Collections, Stanford Libraries.

A tired Dolores Huerta in Sacramento, as the march reaches its end after a month. 1994. The David Bacon Archive, Department of Special Collections, Stanford Libraries.

Workers harvest bananas in the field of the DARBCO cooperative in the Mindanao city of Panabo. 2019. The David Bacon Archive, Department of Special Collections, Stanford Libraries.