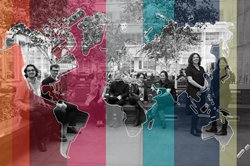 These programs make selection easier for those organizations that already want to do the right thing. We want to contribute to a broader push for industry equality by supporting those clients.

Workplace and real estate strategy consultancy PLASTARC, which provides a range of social science-based design services to global clients, has been certified by the City of New York as a Minority and Woman-owned Business Enterprise (M/WBE). As an officially-recognized M/WBE, PLASTARC will now be more accessible to customers—including government agencies—who wish to promote equal representation in the design and construction industry while also improving their own work environments.

Combining unique mixed-methods research with a people-centric approach to architecture and design, PLASTARC advises clients on evidence-based strategies to improve employee satisfaction and performance. While PLASTARC has been woman-owned and featured a diverse team since it first offered services in 2013, founder and executive director Melissa Marsh explained that her decision to pursue the certification was the result of reflecting on the broader purpose it would serve:

“We never wanted to be selected just because of a certification. We want to be chosen by a client for our great work. We got certified now, in part, because our perspective evolved to better understand a client’s point of view. These programs make selection easier for those organizations that already want to do the right thing. We want to contribute to a broader push for industry equality by supporting those clients.”

PLASTARC has a record of working for corporate and government organizations that place an emphasis on diversity, including the US Federal Government’s General Services Administration, the National Park Service, and the United Nations. The firm has also been engaged by technology companies that are notable for their work around equal representation in the workplace, such as Verizon, Mozilla Foundation, and Unity Technologies.

Research has shown that groups that are more diverse make better and faster decisions, and many organizations now recognize the necessity of building a more inclusive team. Part of PLASTARC’s work includes designing and advocating for physical environments that support the broadest possible range of occupant needs. The consultancy has a long history of putting its commitment to diversity into practice by encouraging flexible hours, supporting employees who wish to travel and continue their education, and sponsoring visas for exceptional talent.

PLASTARC intends to seek additional M/WBE certifications at the state level in New York and elsewhere, a process which will now be fast-tracked.