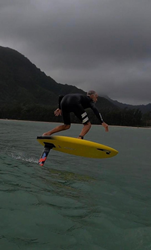 Regarded as “the voice of surfing,” Barton Lynch joins the Sharkbanz Team

“Wearing my Sharkbanz gives me a sense of security and confidence. There are places I do not surf without it. I especially love it when I am miles out in the ocean doing downwinders on the foil and have a fall."

“We’re thrilled to partner with Barton since he represents so much of what the brand is about – helping ocean enthusiasts enjoy the water, even more, no matter your skill level or sport,” said Nathan Garrison, Co-Founder of Sharkbanz. “His passion for coaching is contagious, and anyone who’s ever watched a WSL broadcast knows Barton’s infectious enthusiasm grabs a hold of everyone watching. After years of reducing the risk for elite watermen like the Navy SEALS, we’re stoked to add a surfing World Champion to our core group of brand ambassadors.”

Regarded as “the voice of surfing,” Lynch has built a legacy within the professional surfing world over the last three decades as a tactical competitor and spokesperson for the sport, a testament to his strong work ethic, sharp intellect, and social conscience. He brings his wealth of knowledge to the sport for new and long-time audiences around the world.

"I have an absolute respect for sharks as apex predators and incredible marine creatures,” said Lynch. “Having spent over 48 years surfing, sharks are something I have lived with, but they have been on my mind more now than ever before. Wearing my Sharkbanz gives me a sense of security and confidence. There are places I do not surf without it. I especially love it when I am miles out in the ocean doing downwinders on the foil and have a fall."

Lynch moved to Oahu in 2020 and started foil surfing during the off-season. After seeing multiple sharks when far offshore, Sharkbanz became an integral part of enjoying the water. The brand has worked closely with the legendary surfer over the years through his BL BLAST OFF event for grommets and their families, sponsoring the event and supplying devices for the participating kids.

About: Sharkbanz is the first wearable shark deterrent technology created by experienced ocean goers Nathan and David Garrison. Instead of waiting for the next attack to happen, they decided to do something about their underlying fear. After three years of testing, design, and development, the first version of Sharkbanz launched in 2015. Using patented magnetic technology with decades of research by marine biologists, Sharkbanz takes advantage of a shark’s unique and powerful electroreception to cause a highly unpleasant sensation that turns them away without harm.