The World Congress on Information Technology brought together about 6,000 of the world's top technology and business leaders to discuss the future and challenges of the ICT industry. 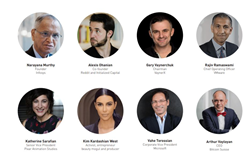 On October 6-9 Armenia’s capital, Yerevan, became the center of the global tech community. The World Congress on Information Technology brought together about 6,000 of the world's top technology and business leaders to discuss the future and challenges of the ICT industry. The world-class program of WCIT covered topics including Artificial Intelligence, Cyber Security, Climate Change, as participants explored the event’s two overarching themes: Decentralization and the Promise and Peril of Technology.

To mark the opening of the 23rd World Congress on Information Technology, on October 6, Yerevan’s iconic Republic Square hosted a concert by the WCIT Orchestra. Internationally renowned DJ Armin van Buuren’s electronic set followed the world's first performance of AI music composed in real time and played by the WCIT Orchestra under the baton of Maestro Sergey Smbatyan.

The orchestra—made up of 100 symphony musicians from the 15 countries that have hosted WCIT during its 40-year history—played music composed in real-time by AI technology, derived from the musical DNA of those countries.

WCIT’s 3-day program consisted of a series of substantive panel discussions, speeches and intimate conversations with consequential figures from inside and outside the ICT industry, including founders of some of the most recognized and respected names in tech.

Speakers reflected on how decentralized technologies have democratized the worlds of entertainment, media, and journalism and revolutionized the manner in which we create and disseminate art and information. They explored the repercussions of these changes and what these developments mean for personal privacy, social relations, trust in institutions and new business models.

This year, for the first time in its 40-year history, WCIT 2019 hosted a series of "Lightning Rounds" which provided entrepreneurs and innovators a unique opportunity to showcase their startup ideas and new technologies in front of a global ICT audience.

On the last day of The Yerevan Talks, the 6 most promising presenters were awarded the inaugural Armenian Technology Communities Prize and shared a $105,000 prize given on behalf of the entire tech community of Armenia. The outstanding six awardees were: Krisp, ForgeFiction, Embry Tech, Viciniti, GeBe Cert and Virtlo.

Apart from the main agenda of WCIT, renowned musician Serj Tankian, tech entrepreneur Alexis Ohanian and the Minister of High-Tech Industry of the Republic of Armenia Hakob Arshakyan held a press conference and announced the launch of Highconnect—a new Pan-Armenian digital platform to unite the Armenian diaspora through their shared and different interests.

WCIT 2019 was a unique opportunity for journalists, technologists and policy analysts to discuss and contextualize the most pressing ICT issues of today. This formed one of the highlights of The Yerevan Talks at WCIT 2019, as they called on participants to continue the dialogue and work towards the goal of optimizing ICT and its role in helping make the world a better place.