Salesian Missions, the U.S. development arm of the Salesians of Don Bosco, joins Catholic organizations around the globe in honoring World Day of the Poor. The day, celebrated on Nov. 13, will be the 6th celebration of the day. 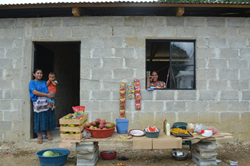 “While education is the primary goal, Salesians know that youth living in conditions of poverty have many more needs that can be addressed before sitting down and focusing in a classroom,” said Father Gus Baek, director of Salesian Missions.

Day was established by Pope Francis in 2016 at the end of the Extraordinary Jubilee of Mercy in honor of the poor.

NEW ROCHELLE, NY (Nov. 13, 2022) - Salesian Missions, the U.S. development arm of the Salesians of Don Bosco, joins Catholic organizations around the globe in honoring World Day of the Poor. The day, celebrated on Nov. 13, will be the 6th celebration of the day. This day was established by Pope Francis in 2016 at the end of the Extraordinary Jubilee of Mercy in honor of the poor.

In this year’s message, Pope Francis noted, “The World Day of the Poor comes this year as a healthy challenge, helping us to reflect on our style of life and on the many forms of poverty all around us.” He recalled the economic challenges brought about by the global COVID-19 pandemic and now the Russian invasion of Ukraine.

Nearly 30,000 Salesian priests, brothers, sisters, and novices are working in more than 130 countries around the globe bringing education, workforce development, and social programs to poor youth and their families. They work in some of the most challenging circumstances and are among the first to respond during humanitarian crises or natural disasters.

“That’s why Salesian missionaries work to meet basic needs like shelter, food, medical care, and clean water while also working to ensure that humanitarian aid reaches those who need it most. Once these most basic needs are met, youth have a better chance at succeeding in school.”

In honor of the World Day of the Poor, Salesian Missions highlights unique educational and social programs that are helping poor and at-risk youth meet their basic needs, receive an education, and find a path out of poverty, bringing them hope for the future.

In coordination with the Salesian Provincial House and with financial support from Salesians in Central America, donors, and other charitable organizations, Salesian missionaries set out to support this community. The first step was to purchase municipal land for the construction of new housing and the church. The work took the cooperation of the local Don Bosco Center and the Salesian-run Talita Kumi Center.

The Sisters of the Resurrection also purchased land that has since been subdivided into 120 lots, where 105 new houses, three churches, a school, a health center, and a community hall have been built. Each family was granted a family farm and farm animals. A cardamom processing cooperative project, including a dryer, is also underway.

POLAND
Thanks to emergency aid funding that was sent to Salesian missionaries in Warsaw, Poland, Ukrainian refugees taking shelter in Salesian houses have supplies they need for daily living. With the funding, Salesians bought duvet covers, sheets, towels, and other supplies like soap, paper towels, and personal hygiene items.

Salesian missionaries in Poland and bordering countries have been providing shelter and support to refugees since the start of the Russian invasion in March 2022. Currently, there are 170 refugees in Salesian houses in the Warsaw province with the capacity to provide for up to 370 refugees.

Because of the supplies, refugees have been able to live in comfort and take care of their living quarters by themselves, which has given them a sense of independence and self-sufficiency. Refugees have been able to focus on looking for a job, caring for their children, and learning the Polish language, among other activities to help them become acclimated to their new environments.

SUDAN
Salesian missionaries with St. Joseph Vocational Training Center in Khartoum, Sudan*, are offering a solar energy project for the students taking the electricity course. The training is engaging students in hands-on exploration in the field of renewable energy. This project was made possible thanks to Bosco Global and financial support from Magone Foundation and the Provincial Council of Huesca, all in Spain.

During the 2021-2022 academic year, first- and second-year electricity students installed several solar panels in three different buildings on the school grounds. Students had the opportunity to learn the installation process, operation and proper use of the solar panels.

A Salesian missionary explained the project’s importance, saying, “Power outages of 10 hours a day can occur in Sudan, so solar energy is a key alternative to this problem, as well as making a very positive contribution to the environment. Currently, renewable energy is booming in the country.”

UGANDA
Salesian missionaries at Don Bosco Children and Life Mission (Don Bosco CALM), located in the town of Namugongo just northeast of the city of Kampala, Uganda, received funding for five dairy cows thanks to a partnership between Salesian Missions and the DD Lynch Family Foundation, an organization that gives to Catholic causes to end human suffering.

With the funding, Salesians bought five dairy cows to provide milk for children in their programs. Four of the cows are now pregnant. An earlier donation by the DD Lynch Family Foundation provided the funding for a modern cowshed so the cows live in good conditions and are cared for by a veterinary doctor and a full-time shepherd.

The project will be sustainable because the cows will multiply, increasing milk productivity. This prevents malnutrition among the children who live in the orphanage and attend the primary school at Don Bosco CALM. Most of the children cared for by the Salesians were once living on the street and are HIV positive or in some other vulnerable situation.

*Any goods, services, or funds provided by Salesian Missions to programs located in this country were administered in compliance with applicable laws and regulations, including sanctions administered by the U.S. Department of Treasury’s Office of Foreign Asset Control

About Salesian Missions USA
Salesian Missions is headquartered in New Rochelle, NY, and is part of the Don Bosco Network—a worldwide federation of Salesian NGOs. The mission of the U.S.-based nonprofit Catholic organization is to raise funds for international programs that serve youth and families in poor communities around the globe. The Salesian missionaries are made up of priests, brothers, and sisters, as well as laypeople—all dedicated to caring for poor children throughout the world in more than 130 countries and helping young people become self-sufficient by learning a trade that will help them gain employment. To date, more than 3 million youth have received services funded by Salesian Missions. These services and programs are provided to children regardless of race or religion. For more information, go to SalesianMissions.org.