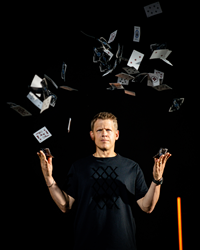 Rick’s latest feats include lighting a match with a high speed card.

In the summer of 2017, Rick was a guest on Dude Perfect, one of YouTube’s hottest channels. The stunt video maker today has 52.4 million YouTube subscribers. It was Rick’s first major YouTube release.

Their collaboration served as a steppingstone to Rick’s YouTube expansion (he now has more than 430,000 subscribers), Rick returned to the Dude Perfect studio for an even more ambitious project for the two YouTube channels that both grew significantly in the intermittent time.

The new trick shots were captured in HD with a Phantom Camera and KYRA robotic arm. Rick’s latest feats include lighting a match with a high speed card, throwing a card between two doors, exploding soda cans with cards and slicing a pea (previously a speeding card cut an olive in half).

Rick, who has over 20 years of experience working in the performance magic industry and operating a multi-faceted entertainment business, recognized YouTube as the next frontier for him to spread his notoriety. Having performed live on television shows, including Shark Tank, Ellen DeGeneres, and The Tonight Show with Jay Leno, he saw the virality of Internet videos as a fantastic way to reach a younger generation that’s more likely to be in front of a computer than a TV set.

“This Dude Perfect project really is the opportunity of a lifetime,” Rick says. “It could end up being the single biggest release of my career.”

Based on the overwhelmingly positive response to his last video with Dude Perfect, Rick said he looked forward to the next collaborative video. “Dude Perfect’s creative spirit and amazing production mesh really well with my card throwing skill. I’m still amazed at how great the final result was when I look back at our first project.”

After working with Dude Perfect the first time, Rick partnered up with a number of other famous YouTubers, including Josh Horton, The Slo Mo Guys, David Dobrik, and many more. He hopes that his channel, which features both tutorials and showcases of his magic and card-throwing skills, will serve as an inspiration for aspiring entertainers and Internet personalities.

For information on his availability for appearances nationwide, visit Rick's website:
http://ricksmithjr.com

His press and media kit provides guidance on inquiries, such as corporate entertainment, commercials, television shows, and at-location gigs.