Understand that we coexist with the spirit world and make better choices to live a happier life with no regret. 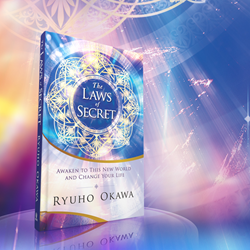 The Laws of Secret (Hardcover)

Discover the secret of the Spirit World or Multi-Dimensional Universe to live better today and learn how to overcome viruses and negative spiritual influences.

“The Laws of Secret: Awaken to This New World and Change Your Life” is the 27th volume of World Teacher and Happy Science CEO Ryuho Okawa’s Laws Series. For those new to the annual Laws Series, each year Ryuho Okawa formulates a new set of Laws or teachings which function as universal guidance to all people in accordance with the changes that each year brings. These teachings serve as guidelines that may be applied to live a happier and more fulfilling life, all while helping those who apply them to strive towards enlightenment.

So why are “The Laws of Secret” needed in this year 2021? What is the benefit of reading this book now? It is to help understand life and make better choices in this era of pandemic. The philosophy of Napoleon Hill became a turning point in the US after the Great Depression and Spanish Flu Pandemic in the early 20th century. The importance of igniting the power of the mind is critical in the age of pandemic in order to work through a tough economic situation. Life consists of a series of choices made everyday but in the most narrow sense, life is shaped by the daily micro choices made in one’s mindset without necessarily realizing the consequences thereof, many of which may be undesired.

Not many people are aware about the wonder and potential of the mind, or activity of thoughts, but thought activity plays a vital role in shaping one’s life and it is directly related and affected by the invisible spirit world or multi-dimensional world all people live in. This world is not just the physical world where one can recognize things with the five senses; instead, the actual world is a multi-dimensional spiritual world wherein all beings co-exist with invisible energies. The physical world is a part of this invisible spirit world or multi-dimensional universe. Ryuho Okawa has been articulating this knowledge for over 35 years through his messages and teachings in more than 2,750 titles in original Japanese (about 200 in English).

While the market is flooded with purportedly spiritual books, the purpose of this book is not merely to share information about the spirit world for the sake of inapplicable knowledge. Instead, this book illuminates greater knowledge of the spirits and their worlds in order to guide the reader towards making better choices for self-betterment and the right perspectives associated with the Noble Eightfold Path. In addition, this book can be regarded as modern esoteric Buddhism.

“The Laws of Secret” reveals the extensive roadmap of the afterlife and spirit or the multi-dimensional world as well as the overall picture of necessary knowledge applicable to making all decisions in life. In addition, the phenomenon of viral infection such as the Novel Coronavirus and its correlation with both spiritual influences and mental states, according to the law of same wavelengths, is exposed in order to aid the reader in securing a healthier life in body and mind. During a time in which humanity is experiencing a global pandemic, such knowledge is truly priceless. Such is crucial knowledge for those desiring to learn about the spiritual science of exorcism, a topic discussed at length, including the manner in which spiritual possession can impact people experiencing mental health difficulties.

Okawa describes the essence of a human being as that of a spirit or thinking energy with various frequencies. According to Okawa, Heaven and Hell are not 50 / 50 and they exist in the mind / heart. People don’t need to wait for the judgement day to know ‘where’ one’s destination in the afterlife will be. The actual ratio of Heaven and Hell is more like 90% and 10% and the actual spirit world is an immense multidimensional universe wherein every dimension corresponds to a particular state of mind. Such is why consciously guarding one’s thoughts and making choices with a willful mindset is extremely important: each person chooses which spiritual influence or energy is interacted with and affects their life.

A unique feature of this book is that it provides an extensive explanation about the Rear Heaven (Minor Heaven)* and the characteristics of its inhabitants. The inhabitants of the Front Heaven (Major Heaven) are known as ‘Angels’, who’s main interests are to support God by helping people as well as pursuing enlightenment. The inhabitants of the Rear Heaven (Minor Heaven) are more interested in psychic abilities or power and living people who have similar soul tendencies to said inhabitants actually receive influences from that world. In “The Laws of Secret,” Ryuho Okawa’s unparalleled psychic abilities are employed to reveal myriad secret truths and dynamics, including these and many others, which impact humans on a daily basis and throughout the human lifespan. Readers are provided a comprehensive lens into the world of spirits which interact with, and influence, human nature as well as the guidance to return to the Front Heaven this lifetime. (*refer to “The Laws of the Sun”)

As readers learn to ascertain the many types of spirits explored in “The Laws of Secret,” an understanding of one’s path in life is gained and potential pitfalls, both upon one’s spiritual and material journey, may be better avoided. Examples of this include learning to discern the spirits that cause people to behave like various types of animals, and spirits that cause a person to become overly ambitious at the cost of everyone around them, only to crash and burn at the height of their temporary success. Further discussions include the absurd limitations which are perpetuated by contemporary academia and media, and which obscure the truth from the eyes of most people.

The wonderful thing about Ryuho Okawa’s books is that they are applicable to any person; such is largely due to the eclectic nature of the teachings that they contain. Whether a person is a Christian, Buddhist, or identifies with any other religion, the teachings in “The Laws of Secret” can be applied toward self-betterment, and even self-mastery. This book is a necessary read for people who are seeking answers about the afterlife and the true nature of the spirit world.

The Hardcover edition of “The Laws of Secret” is now available at Amazon and the Paperback version will be available after April from all major bookstores nationwide and online retailers, including Barnes & Noble and Amazon.

For in-depth commentary on the works of Ryuho Okawa, please listen to the Okawa Book Club podcast now streaming on Spotify, Apple Podcasts, and Amazon Music.