An analysis of the subconscious thoughts and motivations of Joe Biden and President Trump. 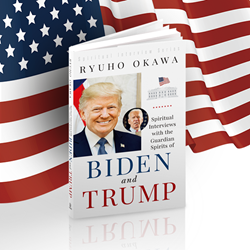 Spiritual Interviews with the Guardian Spirits of Biden and Trump

Candid insight behind the true intentions of both front-runners of the 2020 U.S. presidential election.

A new publication by World Teacher and Happy Science CEO Ryuho Okawa, “Spiritual Interviews with the Guardian Spirits of Biden and Trump,” reveals the true intentions that reside in the subconscious minds of the two presidential candidates in question, and accordingly provides insight that can help Americans to make their decision at this significant turning point in history.

For those unfamiliar with Ryuho Okawa’s spiritual interviews, they are a method utilized in which the subconscious intentions of any individual, whether living or deceased, may be revealed. Okawa has conducted over 1,100 spiritual interviews and messages to date and is unparalleled in his ability to do so. This unique phenomenon is accomplished in accordance with Ryuho Okawa’s six divine supernatural powers of clairvoyance, clairaudience, mind reading, fate reading, astral travel and the extinction of worldly desires. Though some people may possess one or more of these powers, Okawa’s mastery of all six exemplifies him as being an exceptionally spiritually refined individual who is truly worthy of the title of World Teacher.

The first spiritual interview of the book is conducted with the guardian spirit, henceforth referred to as subconscious, of democratic candidate Joe Biden. Throughout Biden’s spiritual interview he is questioned about many topics of interest including his prospective policies on dealing with China. While criticizing Trump’s “hardline” approach, Biden’s subconscious states that he would endeavor to be more diplomatic with China on various issues including the status of Hong Kong. When confronted with the possibility that China may surpass the U.S. as the world superpower within the next twenty years, it is revealed that the subconscious of Biden does not believe this is possible. Biden’s subconscious does not believe that China’s expansion into the south sea is for the purpose of hegemony, but is rather due to an effort to subsist their nation with food; this, and other policies discussed, suggest that the subconscious of Biden would assume a stance with China that differs greatly from that of President Trump.

Following the spiritual interview with Biden’s subconscious is an interview with the guardian spirit of republican candidate and current president Donald Trump. Throughout this interview the subconscious of Trump insists that he will maintain his hardline approach to China if elected to serve another four years as president of the US. Trump’s subconscious reveals that he feels quite certain of victory in the November election, and emphasizes that he has established diplomatic relationships with Vladimir Putin and Kim Jong Un despite accusations that he is not a diplomatic president. Additional subconscious motivations reveal Trump’s intention to bring democracy and freedom to nations living under totalitarian regimes throughout the world.

It is evident when viewing both spiritual interviews that Biden’s subconscious appears intent upon preserving a balance of interests between nations while Trump’s subconscious is concerned with spreading democracy, even if it may bring about geopolitical conflict. The spiritual interviews reveal a myriad of additional information concerning the two presidential candidates and their inner intentions. Previous spiritual interview books, such as “The Trump Secret” (includes Spiritual Interview with the guardian spirit of Mr. Trump before the 2016 election, IRH Press) and “China’s Hidden Agenda”(Spiritual Interview of Xi Jinping, HS Press), have revealed predictions that have since come to fruition, and the astounding predictions published in this book are likewise with a high probability of manifestation. Readers will benefit from having the foresight that is offered in this text.

“The Spiritual Interviews with the Guardian Spirits of Biden and Trump” makes it evident that the outcome of the November elections can bring about two very different administrations as a result of differing perspectives of global and domestic affairs on behalf of the candidates in question. This book offers a rare opportunity to discover the extensive subconscious motivations that drive the US presidential candidates; that which each of them present to the world openly is only the tip of the iceberg. It is hoped that this book will assist readers in making an informed decision about who to support as the US presidential election draws near.

“Spiritual Interviews with the Guardian Spirits of Biden and Trump” is available for purchase at Barnes & Noble and Amazon.com.

To learn more, please listen to the latest episode of Okawa Book Club featuring "Spiritual Interviews with the Guardian Spirits of Biden and Trump." - https://www.podbean.com/eu/pb-ug4nt-ea4cc4

What is a Spiritual Interview?

A spiritual interview is a form of religious journalism. Through unparalleled spiritual ability, by the way of six divine supernatural powers, Ryuho Okawa summons the guardian spirit – known in the field of psychology as subconscious or collective unconsciousness.

The soul of the living person enters Okawa's body and speaks through Okawa using the knowledge and the language center of Okawa’s brain. What is unique is that Okawa is fully conscious, unlike other traditional mediums.

Okawa has published in excess of 1,100 spiritual interviews. These include records of spiritual conversations with the guardian spirits of living people and the spirits of historical figures who reside in the Spirit World. Through these books, Okawa offers readers the resources to guide them through modern issues and the hints to help them steer the future of humankind.

What a person thinks in his or her subconscious will eventually manifest in their words and actions.