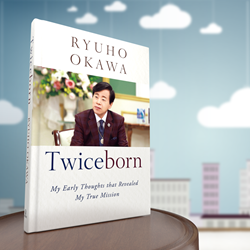 Starting from the ordinary; discover the extraordinary power of self-effort.

“Twiceborn: My Early Thoughts that Revealed My True Mission” is a new publication by World Teacher and Happy Science CEO Ryuho Okawa that provides us with a rare glimpse into the author’s own personal development throughout his youth. “Twiceborn” is both an autobiographical and a self-help book in similitude, making it a unique literary contribution to both genres. Throughout the book Ryuho Okawa explores various life lessons that came to him in his early years and likewise reveals to the reader how they may sublimate their own experiences into lessons that aid in their personal development.

The layout of the book is designed to be easily read and consists of several chapters which each consist of multiple sub-chapters. The sub-chapters are delivered in small increments so that one can read a little at a time and take time to process the great amount of information that is delivered with brevity; such is a defining quality of Ryuho Okawa’s writing style and ensures that his books are a pleasure to read. “Twiceborn” is a book that is worth taking time to read gradually, as the teachings, many of which are seemingly simple, provide a wealth of wisdom that may be applied instantly.

A key concept presented early in the book is that of “starting from the ordinary.” Okawa affirms that it is perfectly acceptable to be an ordinary person with ordinary abilities and means. Rather than deny one’s ordinary nature, it is best to acknowledge and accept it; Okawa accordingly outlines an insightful path of practical guidance concerning the importance of making steady efforts to outgrow from “being ordinary” and become ‘extraordinary’ regardless of the point from which one begins. The bulk of “Twiceborn” is built upon this concept and reveals an incredible versatility in Ryuho Okawa’s ability for contemplation of the challenges and mysteries of life. Okawa himself, as “Twiceborn” demonstrates, went from having a very humble early life to become a revered World Teacher through tireless efforts to manifest the laws of cause and effect that have been filled with myriad accomplishments.

Various philosophical considerations are explored in “Twiceborn.” It is posited by Okawa that before seeking the universal light of God or Buddha in all things, it is important to develop a thorough dualistic perspective. The reason for this is that duality allows one to recognize that which is right and that which is wrong in an objective manner, as well as that which is good vs that which is evil from the perspective of God or Buddha. This differs from many religious and spiritual traditions today, and notably from many variations of Buddhism, which endeavor first and foremost to teach universality without building an adequate moral and ethical compass that is suited to the contemporary world.

“Twiceborn” emphasizes the themes of individuality and enlightenment in an extensive manner. Okawa describes the experience of his own Great Enlightenment in the book, part of which was initiated by his being visited by the spirit of Nichiren at the age of 24. A thorough account of this experience and the lessons gained from it are provided. Furthermore, and similarly to both Shakyamuni Buddha and Jesus Christ, Okawa describes his experience of conquering various devils that visited his mind and endeavored to tempt him with the vices of the material world. The account of this experience demonstrates to the reader how such vices arise in the mind and the manner in which they may be conquered, and likewise reveals how Ryuho Okawa came to master the Divine Supernatural Power of extinction of worldly desires, something which is usually perceived as immensely difficult by the ordinary person.

Part Two of “Twiceborn” is a transcription of Ryuho Okawa’s lecture at the Tokyo Dome on July 15th, 1991, entitled The Victory of Faith. This lecture, which took place on Okawa’s 35th birthday, marked the significant moment in which Ryuho Okawa revealed the nature of the Divinity that communicates through him, named El Cantare. WIthin the lecture all people are instructed to realize the perfect nature of God, or Buddha, that exists within themselves; this is described as the true essence of faith. The words spoken in this lecture are as relevant today as they were in 1991, and are filled with timeless truths.

For those unfamiliar with the works of Ryuho Okawa, “Twiceborn,” as well as the firm “Twiceborn” make for an excellent starting point in that it masterfully delivers many foundational teachings and insights while providing the reader with an opportunity to get to know Okawa himself. For those readers who have already immersed themselves in what are upwards of 2,700 books written by Okawa, “Twiceborn” likewise serves a purpose of revisiting and strengthening the foundational teachings while learning more about the author. Readers of “Twiceborn” will come to learn for themselves why Ryuho Okawa is called the Master of Efforts, and in similitude will learn how they too can overcome their “ordinary nature” and become a unique light of the world.

“Twiceborn” is available for order at all major bookstores nationwide and online retailers, including Barnes & Noble and Amazon.

The film “Twiceborn,” based on this title, will be available from October 16, 2020 at selected theaters in North America.